Micheluzzi fired rounds of 71-67-65-70 to finish at 15-under-par for his maiden win on the Australian PGA Tour.

Earlier Micheluzzi and battled with Jarryd Felton with Felton, the 54-hole leader and 2020 champion, keeping the pressure on until four back-nine bogeys cost Felton a chance at the title. Micheluzzi applied the pressure with a string of birdies before taking the outright lead at the 15th.

Micheluzzi made another birdie on the 16th which gave him a two stroke advantage going down the final hole. Felton then bogeyed the last to card a 75 and finish at 11-under. 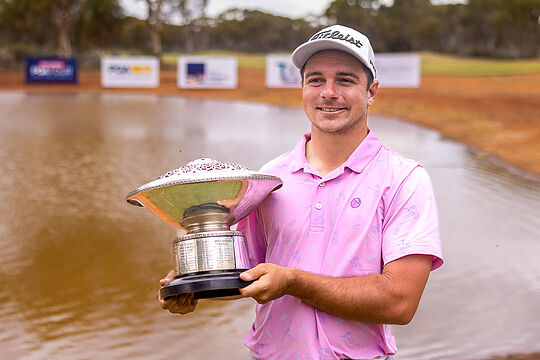 “It feels amazing. I knew I had to play good golf from 13 onwards because ‘Felts’ was three in front. I knew what the scores were and to hit that good of a golf shot into 13, hole the putt, hit a mint drive down 14 – hit a pretty average wedge shot but it was 40 feet and I holed a really good putt there. I didn’t think it would be like this but I’m so happy it went like this.”

Brett Coletta and Jack Murdoch rounded out the top-5 at 10-under-par. Promising amateur Jeffrey Guan finished at 8-under-par for a top-10 result finishing in a share of 9th position.