23-year-old Micheluzzi, who is also a member at Cranbourne, secured his first Victorian Amateur title with a 9&8 victory over 2013 Champion Zach Murray. Micheluzzi’s previous top amateur title was the 2016 Port Phillip Amateur, yet his 2017 season has been full of top-10 finishes in main events including the Scottish Open Amateur, the Western Australian Open and the Dunes Medal. 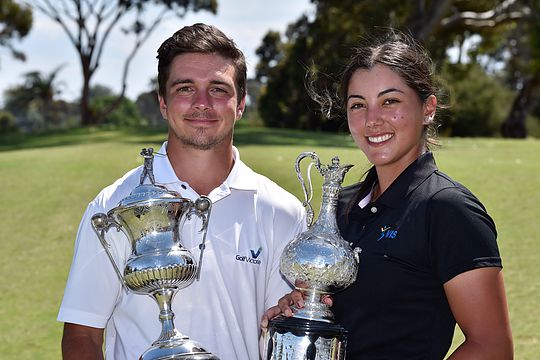 “It hasn’t quite sunk in yet but yeah, just over the moon,” said Micheluzzi after the dominant display over Murray.

After the morning 18 hole matchplay Micheluzzi had headed to the lunch break with a 8-hole advantage, a margin that would prove too difficult for Murray to claw back.

Micheluzzi continued his stellar form into the afternoon with a birdie at the short par-four first and a concession by Murray at the second stretching the advantage to a commanding 10-holes, effectively shutting the gate on Murray.

A dropped shot by the leader at the 7th reduced the margin to eight-holes but a final closing birdie at the 521-metre 10th was enough for Micheluzzi to secure the victory.

“It’s pretty hard to win a tournament and I’ve just ticked one off the list for this year and hopefully I’ll go into next year and win more. I hit it probably the best I’ve hit it all week and also putted the best I have all week. It all kind of clicked which was great. It’s probably some of the best golf I’ve ever played I think.”

Bunque was able to get off to the perfect start in the final taking a 5 hole lead from the morning session but the current Australian Junior Girls Champion, Kim, fought hard during the second 18 and reduced the margin to four-holes with a birdie at the second.

However, Kim was unable to capitalise on her mini resurgence, with the outcome on the 27th hole critical as Bunque landed the decisive blow by holing a 6 metre putt for par and a four-hole lead. A birdie on the next sealed the victory for Bunque.

“Coming runner-up two years ago was a bit deflating at the time, but now going one-better this year is very rewarding, it’s a good feeling,” said Bunque.

“The morning was pretty solid, I think I was about 3- or 4-under which was nice. After lunch the wind just really picked up and I sort of struggled a bit off the tee, trying to find the fairway, competing against a strong head breeze but for me, I just continued to play my own game and not worry so much about what Grace was doing.”

Bunque and Micheluzzi’s victories have given the pair starts in the Victorian Open.