Phil Mickelson won’t be disappointed with his major form this year. After all, he won the PGA Championship, his sixth major title, at the age of 50.

Still, any week where you walk off after the first round with an 80 on your scorecard is not going to be pleasant and that’s exactly what happened on Thursday at the Open Championship where the now-51-year-old fired a 10-over 80 to finish the day in equal last place with Australia’s Deyen Lawson. 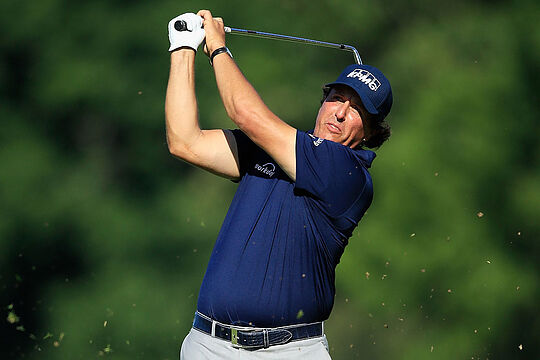 Mickelson, the 2013 Open winner, managed to claw back a few positions on the leaderboard with a 2-over 72 on Friday before missing the cut for just the seventh time in his Open career.

“I’ve worked hard. I’ve prepared. I felt like I was playing well and I played some of my worst golf,” said Mickelson.

“And I don’t have great answers. So I have to kind of figure out how to get back to the level of play I know I can like I did at Kiawah and try and contend. I have some focus issues I need to work on.”

Mickelson wasn’t the only big name to fall foul of the quirky Royal St George’s layout.

Henrik Stenson, who denied Mickelson a second Open title in 2016, was one of a number of previous champions to fail to make it though to the weekend.

2018 Champion Golfer Of The Year, Francesco Molinari, missed the cut by a shot alongside Australia’s Marc Leishman, an Open runner-up in 2015, despite the Victorian’s valiant 67.

Ryder Cup villain, Patrick Reed, failed to make his mark and joined the in-form Stewart Cink on the sidelines. While Reed didn’t look a chance, Cink came out of the gate red-hot on Thursday with a superb 66 before bizarrely falling out of contention with a 7-over 77 in the second round.

Of the 11 Australians in the field just Adam Scott and Cameron Smith made the cut. Recent European Tour winners, Lucas Herbert and Min Woo Lee, came into the week with high expectations but couldn’t do enough to make the 1-over cut.