Mickelson back in the Ryder Cup conversation

Phil Mickelson pulled off a win for the ages on Sunday at the PGA Championship. But the 45-time PGA Tour champ still has some work to do if he wants to play for the US this September.

Incredibly he has never missed a Ryder Cup since his debut in 1995 despite needing a captain’s pick to keep that streak going in more recent years. 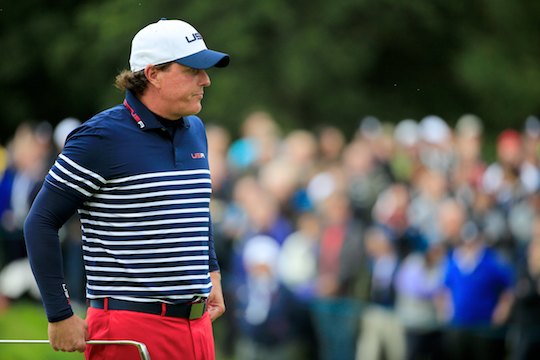 Mickelson’s historic major win on Sunday moves the 50-year-old from 36th to 16th place in the US Ryder Cup standings with the top 12 receiving an automatic spot on the team.

Of course his playing partner, Brooks Koepka, is already a lock, moving up two spots to 4th place with his runner-up finish at Kiawah Island.

Raymond Floyd holds the current record for oldest Ryder Cup member at 51 days and 20 days for his 1993 appearance. Mickelson will be 51 days and 100 days when play kicks off at Whistling Straits.

Asked on the weekend about Mickelson’s chances, Captain Steve Stricker said that Mickelson will need to continue playing well if he is to become one of his six captain’s picks.

“He hasn’t played really all that well up to this point, spurts here and there. He’s won on the Champions Tour a couple times. You could put a pretty good amount of weight on this week…we’ve got wind, we’ve got links style but not really links style golf, which is similar to Whistling Straits.”

“Myself and the captains, we’ll look at who played well here this week for sure because this is a telltale for Whistling Straits.”