Phil Mickelson and Charles Barkley have taken out the third iteration of The Match with Mickelson and the NBA Hall of Famer securing a solid 4&3 win over Peyton Manning and Stephen Curry at Stone Canyon Golf Club in Arizona.

The event was held with a focus on promoting and contributing to historically Black colleges and universities, raising a total of $4.4 million.

Barkley had the occasional mishap, but with Mickelson assisting his 25-handicap teammate to hit safe irons off the tee so he could handle the majority of approach shots, the pair continued to place pressure on their opponents.

Mickelson and Barkley finally closed out the match with a birdie at the 15th hole, which they halved as Manning also drained his birdie putt.

The smart money was on Team Manning/Curry to take out the title with Barkley’s infamous unorthodox swing seemingly unfixable but obviously he’s put in some hard work in recent months and surprised everybody, including Phil Mickelson, with the turnaround in form.

“Two people thought this was going to happen. You and me..that’s it,” said Mickelson as he celebrated with Barkley after the winning putt. 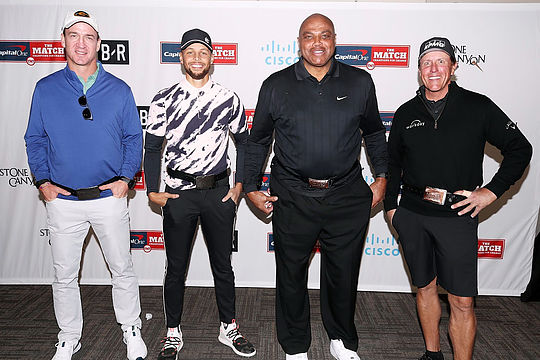 “The world has been SHOCKED! My man Sir Charles surprised everyone with his great play and dominating performance. So happy for you and thankful to be your partner.”

The format, which is made for TV, presented a different change of pace for the 44 time winner on the PGA Tour, which include Mickelson’s five major championships. Like the first two iterations, the event featured unprecedented access to the players, who all were wearing microphones.

Add the “Cart Cam” and the viewing public were able to see players directly communicating with each other and the broadcasters. The event was closed to the public due to COVID-19.

The much anticipated first edition of The Match took place at Shadow Creek in Las Vegas in 2018 with Mickelson defeating Tiger Woods on the 22nd hole in the $9 million showdown.

A rematch was held earlier this year where Tiger Woods and Peyton Manning defeated Phil Mickelson and NFL superstar Tom Brady in an event that raised more than US$20 million for various COVID-19 charities.