US Captain Steve Stricker has named Phil Mickelson and Fred Couples as vice-captains for the 2020 Ryder Cup, which will tee-off later this month at Whistling Straits in Wisconsin.

“I’ve been staying in close contact with both Freddie and Phil, talking about all things Ryder Cup, for a while now,” said Stricker. 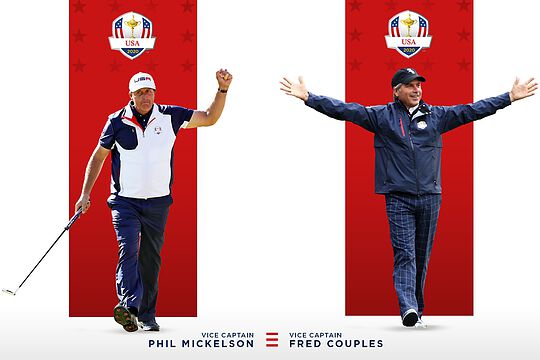 “They provide honest and impactful feedback, and both have such a passion for the Ryder Cup. I’m honoured that they were willing to join our Team and help put us in the best position to win in a few weeks at Whistling Straits.”

Mickelson’s vice-captain appointment marks the end of a Ryder Cup playing career that remained unbroken for over 25 years. The 51-year-old competed in his first Ryder Cup in 1995 when the Europeans won 14½ to 13½ at New York’s Oak Hill Country Club.

“I’m humbled and honoured to be a part of this years Ryder Cup as an assistant captain. Thank you Captain Stricker for including me and I hope to help in any way possible. GoUSA,” tweeted Mickelson.

Couples will make his second appearance as a Ryder Cup vice-captain following his role alongside Davis Love III in 2012. The 15-time PGA Tour champion competed in five Ryder Cups from 1989 through to 1997 including back to back wins for the US in 1991 and 1993.

And what about the injured Tiger Woods?

“He’s just not able to be there at this time,” said Stricker of Woods’ potential appearance as a vice-captain.

“He’s progressing nicely but Whistling Straits is a tough place to get around. He’s already been helping and will continue to do so.”