Phil Mickelson is $9 million richer and, perhaps more importantly to him, has grabbed bragging rights after defeating Tiger Woods at the 22nd hole in their winner-takes-all match at the Shadow Creek GC in Las Vegas.

The Match as it was being billed, ended in darkness with floodlights needed to light-up a makeshift downhill par-3 hole of just 93-yards. 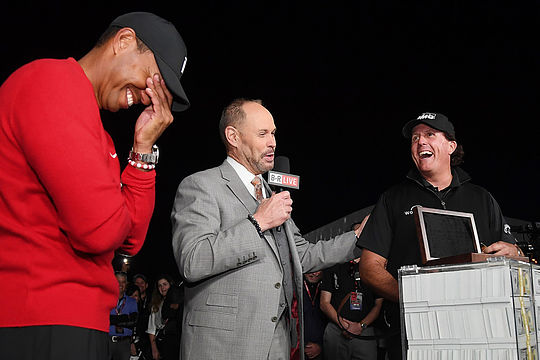 Mickelson and Woods had ended regulation play at all-square after Woods and the former fierce arch-rivals headed back to the 18th for a second time only for the hole to be halved with par 5s.

It was then to the clubhouse where greens staff worked feverously to ‘cut’ a hole on the practice putting green and a tee shot now measuring 93-yards.

The duo then proceeded to par the hole on the occasion of the 20th and 21st extra holes before Mickelson ended the match holing a 4-footer for birdie just seconds after Woods had missed a 7-foot birdie putt.

Mickelson and Woods then headed back to the clubhouse where on the grass lay US$9 million in bank notes.

“I am just trying to calm down right now,” said Mickelson.

“My heart just cannot take much more but then this is such an incredible opportunity to have a day like this playing against Tiger.”

“But then a day like today is not going to take anything away from him and his greatness as he’s the greatest of all time though to be able to have just a little bit of smack talk for the coming years means a lot to me as I really don’t have much on him (smiling).”

“He also draws the big picture and the trump card but to have a day like today was just so special.”

“Though I never thought we would go to extra holes as my heart just cannot take much more of it.”

Mickelson, who was 1up playing the 17th, had the chance to close out the match on 17 in regulation only for his birdie putt to hit the hole and fail to drop.

Woods then took full advantage to square the match when he holed his birdie putt so that the duo headed up 18 back to all-square.

“Tiger does that to my all the time, all the time and he’s done that for 20-plus years,” said Mickelson laughing.

“I hit that shot on 17 in practice and the first putt I hit went 10-feet by the hole and then hitting the putt on 17 in the match, it was a such a perfect chip and just didn’t capitalise on my opportunity there on 17 but I sure got lucky in the end.”

Mickelson then got out of gaol on the second extra hole, the par-5 18th, when he seccond shot plugged in a bunker lying just short of the green but with a small stream running below the raised green and seperating the bunker.

But both players missed birdie opportunities before the match was decided in a very undramatic manner on a makeshift hole of only 93-yards and Mickelson revealing he was hiting lob-wedge.

“Looking back on my putt on 17 in regulation, I just had to hole my birdie or the match was all over,” said Woods.

“Phil hit a perfect-looking birdie putt but then I did not want the match to end of that hole.

“So, I hit a good chip there on 17 that rolled in and we then went to extra holes.

“Overall, it’s been a good day and we managed to raise a lot of money for charities that we are both involved such as stem-learning and also charities here in Vegas, so it means a lot to both Phil and myself.

“This event was made-for-TV. It was fun, competitive and at the end of day we had a lot of fun.”

Woods and Mickelson have combined for 122 PGA Tour victories and 19 major championship titles in their respective careers.

Mickelson now heads to his off-season break while Woods will tee-up next week playing host to 17 other players in the Hero World Challenge on the Albany course and where a year ago he returned to competition after fusion surgery on his back.

This year Woods tees it up as the Tour Championship champion.