When a sweet-swinging teenager from South Africa pulled off a wedge shot, 30 yards out from the green that checked up a foot from the hole, Phil Mickelson new he had his work cut out.

It was the 1984 Junior World Golf Championships in San Diego and a 14 year old Mickelson was the hometown hero. 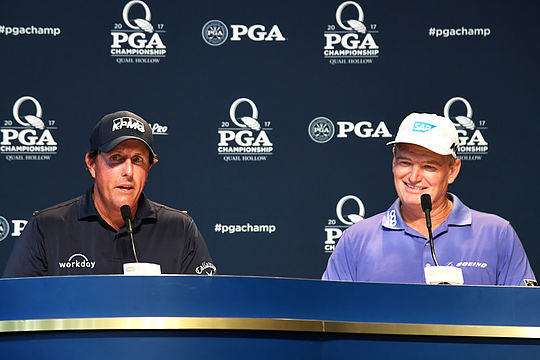 Unfortunately for the future champ, his suspicions proved correct as that very same teenager who went by the name of Ernie Els went on to beat him for the title.

“Do you see how grumpy Phil looks there?” says Els of a post-match photo of the two.

“It was quite a while ago, I can tell you. We had a great time.”

“It was my first time in the United States and what a place to go play golf at in San Diego. I guess that was the first time we met.”

A mere 33 years later Phil Mickelson isn’t quite as salty.

And that’s perfectly understandable given they would go on to win nine majors titles between them.

And in a twist that’s both sweet and fitting, the teenage rivals both competed in their 100th major Championship last weekend, a feat that only 12 other players in history have accomplished.

“It just goes by so fast; you don’t think about it,” says Mickelson. “It’s been a lot of fun.”

“We get to play golf, what most people do on vacation, as our job, and it’s the greatest job in the world.”

“And playing major championships is what we dreamt about as kids.”

In a special press conference before last weekend’s US PGA at Quail Hollow, the pair spoke about their careers, and staying in contention for as long as they have.

“It’s a hell of a thrill. It’s what we play for, what we practice for; and you want to pull off great shots in the bigger stage.”

Sadly both these legends of the game had a rare weekend off when Els (80-70) and Mickelson (79-74) missed the hallway cut at Quail Hollow after two rounds marred by missed opportunities.