Phil Mickelson had endured almost a half-decade long winless drought since his victory at the 2013 Open Championship. But today was the day that all changed in dramatic style by defeating the red-hot Justin Thomas at the first extra play-off hole to capture the WGC – Mexico Championship.

Mickelson snared seven birdies in his round of 5-under 66 and none better than a 20-footer at his 70th hole on his way to a 16-under tally.

Thomas, the winner of last week’s Honda Classic, moments earlier had the crowd roaring with delight when his 120-yard approach shot at the final hole spun back into the cup for an eagle and a round of 64 with Thomas producing the lowest closing 36-holes (62 and 64) in WGC history.

Mickelson’s first win since clinching the 2013 Open Championship at Muirfield makes him the oldest winner of the title and takes his pro career tournament tally to 48 and his PGA Tour victories to 43. 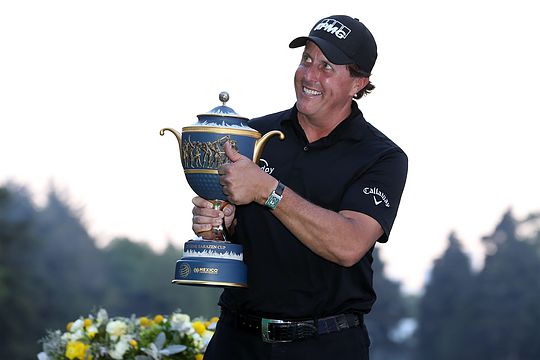 “It has been a tough go the last four years or so without playing my best and to have the belief I was going to get there and finally break through and do it feels incredible,” said Mickelson.

“I believe more is to come and I am starting to play my best golf, and to culminate here in Mexico City with victory in a World Golf Championship is exciting beyond words because it just validates the hard work I have put in and the hard work the last few years to get my game back.”

The win is Mickelson’s fourth WGC crown and a first WGC succes since capturing the 2009 WGC – Champions event in Shanghai.

England’s Tyrrell Hatton again let his emotions get the better of him to miss out on the play-off by a shot after taking three shots to get up-and-down from the edge of the green at the last for a sloppy bogey in a score of 67 to finish at 15-under alongside Spain’s Rafa Cabrera-Bello.

Sadly, there was no fairytale ending for 21-year-old sensation Shubhankar Sharmar, who let slip his two-stroke overnight lead to shoot a final round of 74. The Indian superstar settling for a share of 9th place on 10-under.

Following six US Open second place finishes, Mickelson’s burning passion remains success in the US Open, where a victory would secure golfing immortatlity with membership into the ‘Grand Slam’ club.

“The thing about this game is that I just love the challenge and I could not have pulled off this victory without the support of my coach, Andrew Getson who has really helped me get my swing back along with brother who has done a phenomenal job as my caddy, and the support of Callaway, who have provided the equipment and support system in what has been a tough time as they have stood with my through the good and the bad,” said Mickelson.

Mickelson’s win has lifted him to third on the FedExCup standings and is also a huge boost in his goal to qualify automatically later this year for the USA Ryder Cup team.

Adam Bland led the four-man Australian attack in Mexico this week finishing in a share of 18th place on 7-under. Bland won a start at the tournament following his second placing on the 2017 Australasian Tour Order Of Merit.

Marc Leishman fell 26 places in the final round after a horror 6-over 77 while Wade Ormsby and Brett Rumford finished in equal 50th and 62nd places respectively.

The PGA Tour now moves to Florida for the Valspar Championship where Tiger Woods will return after a one week break. Woods also announced late last week that he will play the following week at the Arnold Palmer Invitational in preparation for the US Masters in early April.