Phil Mickelson heads to this week’s British Open in the best form possible ending a 20-year European winless drought with a playoff victory in the Aberdeen Asset Management Scottish Open at Castle Stuart.

Mickelson, the highest world ranked player in the field, captured his 50th pro career title after defeating South African Branden Grace with a birdie at the first extra play-off hole. 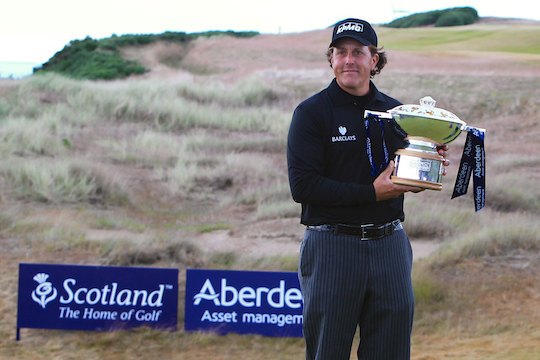 Both players had ended regulation play tied at 17-under par with Grace posting a 69 and finding his way into the play-off when Mickelson horribly three-putting the last hole for bogey in a round of 68.

However Mickelson then brilliantly played one of his trademark wedge shots landing his 45-yard third shot a few feet past the hole before the ball spun back to some six inches from the cup for the easiest of birdies while Grace missed his birdie putt from 25-feet.

Mickelson had lost the event in a play-off six years ago at Loch Lomond and has finally captured the event in his ninth Scottish Open appearance.

“I’ve been coming to Scotland now for quite some time and I’ve enjoyed my stay every year and while I’ve had some opportunities before and I almost let it slide away today,” he said.

“So to come out on top feels terrific and this Castle Stuart golf course is just wonderful and I’ve had so much fun here the last three years, so to win means a lot to me.

“I was so mad at myself for losing my focus and three-putting the last hole in regulation play so I went back to the 18th hole for the play-off pretty focussed to make a four.”

Mickelson, who collected a first prize cheque for $US 742,800 (Euro 580,000), now will firm as a favourite at Thursday’s starting 142nd British Open championship at Muirfield to the east of Edinburgh.

The American was third in the 2004 British Open at Royal Troon and joint runner-up two years ago at Royal St. George’s.

“This week has been very valuable for next week as I did a lot of things well and I also there is a few things I still need to work on,” he said.

“But then today was a great day for us to have this type of windy weather as the first three days were very benign and it didn’t have the teeth this golf course can have on a day like today.

“So I am anticipating this kind of weather next week at Muirfield, and if we have it today was very important for me getting ready.

“And I’ve never felt more exciting going into an Open Championship than I do this year thanks to this Scottish Open victory.”

Mickelson’s only victory in Europe prior to the Scottish Open was in 1993 when he captured a secondary Challenge Tour event near Euro Disney in Paris.

Grace was looking not only for a first win this year but a second straight success in Scotland after capturing last year’s Alfred Dunhill Links Championship, and a victory highlighted by a blistering 60 at Kingsbarns.

“Mickelson is a great player and he’s not going to mess it up on the last,” said Grace.

“I’m still pleased, played well, put myself in contention and it’s a good week heading into next week.”

“I was playing maybe for third or something, and it just shows how quickly things can change out there.”

“But I’m happy, vibes are good, playing into next week, British Open is something to look forward to, and I just hope I can take the quality of golf into next week.”

Danish rookie J B Hansen and Sweden’s Henrik Stenson both shot 71s to share third place on 15-under par.

Hansen dropped four shots with a quadruple bogey at the second hole and then raced into a share of the lead with seven birdies over his next eight holes.

After three years at the Castle Stuart course in Inverness the tournament is moving in 2014 for just one year east to Aberdeen and Royal Aberdeen that hosted the 2011 Walker Cup.