Phil ‘two glove’ Mickelson will take a one-shot lead into the weekend at The 145th Open Championship with Henrik Stenson and Søren Kjeldsen breathing down his neck at Royal Troon.

After a record-breaking 63 on day one, Mickelson had an almost impossible act to follow but in the more favourable morning conditions he recorded a 69 to get to ten under par, a shot clear of Stenson. 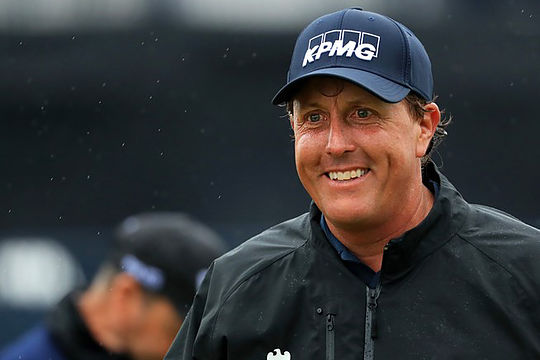 The Swede recorded the round of the day with a 65, with Dane Kjeldsen and 2011 US PGA Championship winner Keegan Bradley two shots further back and two clear of defending champion Zach Johnson.

While Stenson and Kjeldsen are seeking their first Major Championships at the ages of 40 and 41 respectively, 46-year-old Mickelson has seen it all before and already has a Claret Jug from his 2013 victory at Muirfield.

And as we saw at Castle Stuart last week, when the weather turned poor Mickelson donned black golf gloves on each hand to combat the elements.

“I really enjoy the challenge that this weather and these elements provide,” he said. “I thought it was a good round to back up the low round yesterday. I played kind of stress-free golf again.”

“I made one or two bad swings that led to bogeys. But for the most part kept the ball in play and played kind of stress-free golf.

“This was the first course that I really played effectively links golf in 2004. That’s where it really kind of turned for me.”

“This is where it kind of happened. This is where I stopped trying to overpower the golf course, where I kind of accepted playing it as it’s designed and not trying to find a new, better way to beat the course other than just straightforward golf. That’s probably why I love it so much.”

“We’ve got a lot of work to do. We’re only halfway done with the tournament. But certainly there is nothing more that I would love than to add another Claret Jug.”

Mickelson took advantage of the par five fourth and then put his approach on the seventh to four feet before nearly spinning the ball back into the hole on the Postage Stamp for an ace.

At that point he had a five-shot lead but he blemished his card for the first time this week at the 12th before hitting back with a 20-foot putt on the 14th.

Another shot was dropped on the next and while he looked in big trouble in the bunker on the 17th, Mickelson produced an exquisite save and parred the last.

Stenson caught fire early, making three straight birdies from the third and adding another on the seventh. A shot went on the ninth but further birdies on the tenth, 13th and 16th meant the BMW International Open winner had cut the gap to one.

Kjeldsen fired a bogey-free 68 with birdies on the par five fourth and sixth, two excellent par saves on the seventh and 11th and a huge birdie putt on 17th.

Sergio Garcia, Andrew Johnston and Charl Schwartzel were in the group at four under, with Rafa Cabrera Bello and Martin Kaymer a shot further back as the later starters struggled to make an impact in heavy rain and fierce wind.

Despite a 2-over 73 today, Adam Scott leads the Australian field alongside Matt Jones at even par and ten strokes off the pace.

Greg Chalmers, Marc Leishman and world number one, Jason Day, all sit in 41st place at +1 with Scott Hend (T51) the last of the Aussies this week to make the cut.