By his own admission 50-year-old Phil Mickelson has not been playing well. Out of thirteen events this season, he has made just seven cuts and two top-25 finishes.

After missing the weekend at last week’s Valspar Championship, the 44-time PGA Tour winner admitted that he has been finding it hard to focus on course as he gets older.

However, It seems something has improved dramatically since last Friday as the 5-time major winner reeled off a 7-under 64 in the first round of the Wells Fargo Championship this morning to take a two-shot lead over Kyoung-Hoon Lee and Keegan Bradley.

Mickelson birdied his first hole (10th) before giving one back at the 11th, however that was the last mistake of the day. From the par 4, 14th hole, he made another four birdies before making the turn and then added another three at the 1st, 7th and 8th holes.

It was his best round since a 7-under 63 in the second round of the 2020 Travelers Championship, which also followed a first round 64. 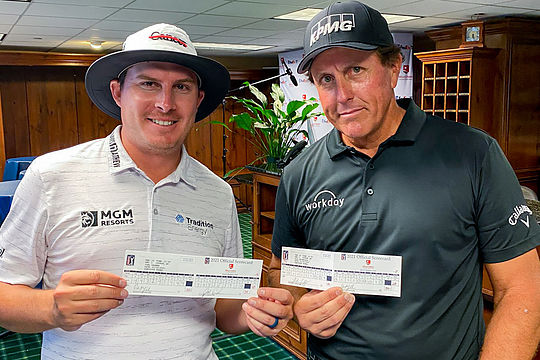 Joel Dahmen and Phil Mickelson show off their round one cards (Credit: PGA Tour)

“The biggest thing for me was I was able to say in the present and focus on each shot,” said Mickelson, who played alongside Joel Dahmen (68) and Lanto Griffin (75).

After spending close to three decades inside the world’s top-50, Mickelson is now ranked at 115th and remarkably is not eligible for the US Open, which he has famously never won despite six runner-up finishes. Mickelson has said he would not accept a special exemption from the USGA so a win here make sure he got there off his own bat.

“There’s nothing physically holding me back from playing at a high level, but you cannot make mistakes at this level,” said Mickelson, who turns 51 in June. “The guys out here are just so good.”

Matt Jones heads the Aussies in the field in a tie for 18th followed by Cameron Davis (T35), Jason Day and Cameron Percy (T73) and Lucas Herbert (T138).