Mickelson to take on LPGA in Skills Challenge

When it comes to the short game Phil Mickelson is one of the best in the world – if not the best, right?

Well, three of the best women players in the world might have something to say about that next week when they take on ‘Fabulous Phil’ in a Skills Challenge before the next women’s major championship, the KPMG Women’s PGA Championship at Olympia Fields in Illinois. 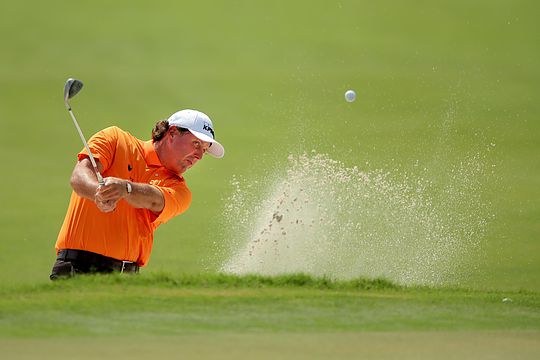 Lydia Ko, Stacey Lewis and Brooke Henderson, who all boast pretty hot short games themselves, will need to be at their best to match it with Mickelson.

Although it has to be said Mickelson doesn’t have the best record at Olympia Fields…‘Lefty’ finished tied for 55th at the 2003 US Open when it was played there.

Plans are for the group to compete in three timed skills challenges.

They will chip to a number of different targets followed by hitting a flop shot over an eight-foot wall.

Then they will be required to try and hit shots that will shatter panes of glass (with their faces stuck on each of them).

It’s been described in the US as a type of Big Break meets American Ninja Warrior challenge.

The players are looking forward to the fun and games and afterwards have agreed to take part in a question-and-answer session with ESPN’s Mike Greenberg, who will host the event for an audience made up primarily of a collection of youth golfers.

The Skills Challenge will take place on the South course at Olympia Fields, where the KPMG Women’s PGA will also be played.

Certainly Mickelson will have his hands full as all three will expect to have their games honed and at their peak for one of their biggest events of the year.

While Mickelson…well, he missed the last men’s major, the US Open at Erin Hills because he was attending his daughter’s graduation.

Let’s hope he’s been hitting a few chips in the backyard during his brief break from the game.