Mickelson to use “Phrankenwood” at Masters

The X Hot Phrankenwood is a prototype club and a bold extension of the X Hot fairway wood technology. 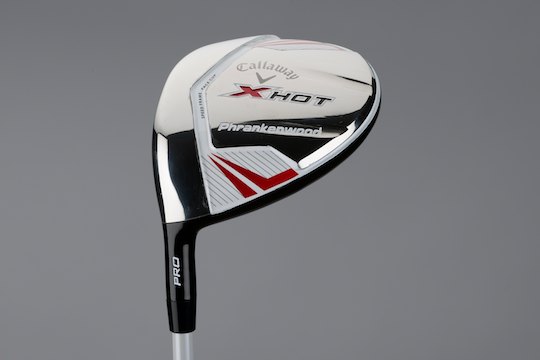 Phil Mickelson’s X Hot Phrankenwood prototype has a 8.5 degrees loft and is 250cc. He is using a 45-inch Fubuki k 70X Prototype shaft in the club.

The X Hot Phrankenwood is the brainchild of Mickelson, who wanted a modern 2-wood and collaborated closely with Callaway R&D to bring the product to life in time for the first major championship of the season.

Having experienced significant gains in distance using Callaway’s new X Hot fairway wood technology, Mickelson began looking for a fairway wood built from this technology that he could hit off the tee as far as his driver, but with a flatter ball flight and with greater control of the left-to-right shot shape.

“It looks like a 3-wood but it’s bigger than our 3-wood and it’s almost like a small driver. But it’s the 3-wood technology in our X-Hot. What it’s done is taken a lot of spin off of it.”

“If you watch, you’ll see that a lot of the shots off the tee that I hit have a lot more scoop on them.”

“Tee shots on nine (at Augusta) are getting down to the bottom of the hill; I haven’t been able to do that in years. Tee shot on 10 is getting another 15 or 20 yards, giving me a club or less than I’ve had in years.”

“The tee shot on 15 is getting down to where I’m getting one or two clubs less in because it comes off fast and has low spin and it’s running and that’s exactly what I want here.”

With a unique combination of shape, size, X Hot ball speed and a significantly lower spin rate he can do this effectively with the X Hot Phrankenwood prototype.