Mickelson: Two Drivers at Masters, None at Open

This week Phil Mickelson will tee it up at The Open Championship without a driver in his bag.

For the second Major in succession, the 43 year-old American has elected to swap his driver for a fifth wedge and he has little doubt it will prove to be a sound tactic on a course where accuracy is much more important than distance from the tee. 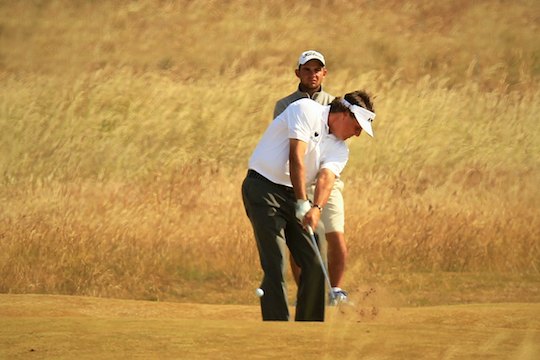 Phil Mickelson practices ahead of the 2013 Open Championship (Credit: www.golftourimages.com)

“I feel like the 64 degree wedge can save me a lot of shots on this firm ground,” he said.

“I just don’t see how a driver is going to help me in many areas. I’m able to hit my 3-wood almost as far (as a driver) on this firm ground and distance on any tee shot is not even in my mind.”

“It’s all about avoiding bunkers, avoiding rough, getting the ball in the fairway and I can do it a lot easier with clubs other than a driver.”

Mickelson arrives at Muirfield fresh from victory at last week’s Scottish Open and convinced that he has overcome the putting problems that have plagued previous visits to The Open.

“I think the common thread over the years is that I haven’t putted very well on these fescue greens but I’m really optimistic this week because I’m start to putt as well as I have ever done.”

“Last week was a very positive sign for me because I putted well on difficult fescue grasses and in the wind on Sunday. That’s given me problems here in the past but hopefully I have it solved.”

The American believes the last piece in the jigsaw is the luck needed at a Championship where the weather conditions can change dramatically over the course of a single day.

“We all saw what happened to Tiger here in ’02. It was one of the worst breaks imaginable because he had won the first two Majors and had a shot at the Grand Slam, but that’s part of the tournament here.”

“I missed the weather here in ’02 because I played so poorly the first two rounds I teed off early Saturday but I did get in at St George’s.”

“I thought that weather was the worst I had played in a long time although I played the absolute best nine holes I’ve ever played.

“You just need a bit of luck with the weather and you need to stay out of the rough.”

“The key to the rough is staying out of it,” he added with a laugh