He’d just won his first major in eight years and become the oldest major winner ever at almost 51. But his popularity amongst his peers was also on display as Phil Mickelson headed to the scorer’s hut following an historic major win.

Following a three-hour wait, world No.3 Jon Rahm was first on hand with an emphatic embrace to congratulate the six-time major winner. Rahm has a long history with the Mickelsons and especially with Tim, Phil’s brother and caddie. 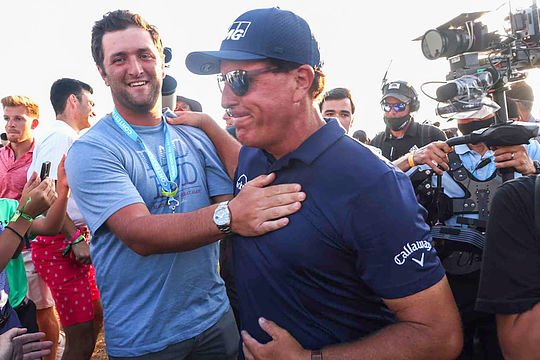 In another life, Tim Mickelson was a college golf coach and was responsible for bringing a young Jon Rahm to Arizona State. In fact, Tim Mickelson was so enamoured with Rahm’s future potential that he was all set to become his agent before older brother Phil tapped him on the shoulder to replace long-time caddie, Jim “Bones” Mackay, four years ago.

“His enthusiasm is what keeps him going; at his age, he has the same enthusiasm I have at 26, and he’s been doing this a very long time,” said Rahm after his round.

“I mean, he’s been on Tour as long as I’ve been alive. For him to keep that willingness to play and compete and practice, even when he hasn’t been working, it’s truly admirable.”

Rickie Fowler, dressed in his iconic Puma orange and fresh off his best finish at a major since the 2019 Open Championship, was next on hand to celebrate with Mickelson followed by England’s Paul Casey, each with receiving an emphatic embrace from Mickelson.

European Ryder Cup captain Padraig Harrington, who will hoping Mickelson loses some of his shine before heading to Whistling Straits in September, also enjoyed a warm embrace with Mickelson. Harrington finished tied for 4th alongside Casey.

And finally it was South Africa’s Louis Oosthuizen, who waited at the scorer’s hut entry for Mickelson. Oosthuizen looked like spoiling Lefty’s parade several times during the final round but with his ball finding a watery grave at the 13th for a double-bogey, he just couldn’t do enough to get over the line.

“It was like the Phil that I remember watching just when I turned pro and it was great to see,” said Oosthuizen.

“I mean, what an achievement to win a major at 50 years old, and he deserves all of that today.”

Mickelson is a proven fan-favourite but it was nice to see his fellow golfers celebrating the win, especially when some of those same players missed claiming the title themselves by just a few strokes.