Italian golfer Guido Migliozzi won his first European Tour title with a one-stroke victory at the Kenya Open on Sunday.

The 22-year-old, who was playing in the 14th event of his first year on tour, fired a 2-under 69 in the final round to finish ahead of a three-way tie for second place between Spain’s Adri Arnaus and South African pair Louis De Jager and Justin Harding. 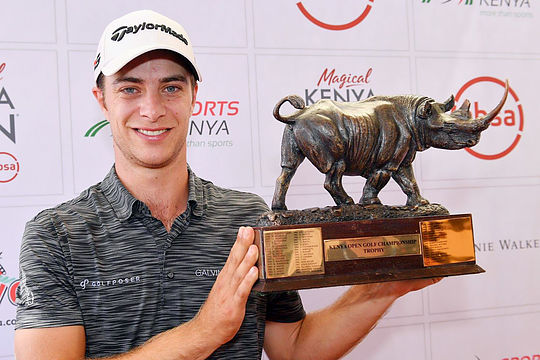 Migliozzi, who became a European Tour member for the first time in November last year after progressing through Qualifying School finishing in 13th position, started the day in a tie for the lead with fellow rookie Adri Arnaus, with the pair doing battle throughout the whole final round until Migliozzi nailed his approach into the 18th to set up a two par putt and victory.

“I like this moment,” said Migliozzi. “I like the pressure, it’s like a drug. I love pressure, I love playing with a lot of people looking at me and a lot of cameras.”

“There was a lot of pressure on the course. After the birdie at the 12th I was leading but it was tough. I just kept patient towards the end, that was it. I enjoyed the last two days very much. The pressure was a lot and I’m happy about how I’m playing under pressure, also with my putting game that I worked a lot on.”

As an amateur Migliozzi won the 2011 Italian Boys Under 14 championship, 2012 Italian Under 16 Stroke Play Championship and in 2016 collected the Portuguese International Amateur.

Nick Cullen was the best of the Australians finishing in a tie for 54th position at even par. The only other Aussie in the event, Deyen Lawson, failed to make the weekend.

The Magical Kenya Open was making its debut on the European Tour and will remain on the calendar for another four years.