It probably wasn’t the preparation he was hoping for.

Yet Canberra professional Matt Millar could also be excused for “keeping his powder dry” and preparing for one of the biggest weeks of his golfing life when he heads for China this week. 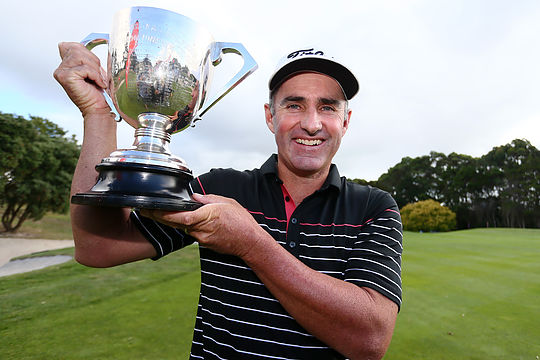 Millar has been granted a late invitation into the field for the $US9,500,000 World Golf Championships-HSBC Champions event at Sheshan International GC in Shanghai and for a battling pro ranked 398 in the world, it is the opportunity of a lifetime.

Millar headed for Brisbane Golf Club for last week’s $110,000 Queensland Open and fired rounds of 70-71-72-73 to finish in a tie for 32nd at six-over par and a distant 13 shots behind surprise winner, amateur Brett Coletta.

Still Millar’s mind was probably on the enormity of the task that lies ahead of him this week and the opportunity to cash in on an event with no cut and a first prize cheque of about $US1.4m

Millar thought he had bombed his shot at mixing it with the big boys of world golf when he finished third on the Australasian Order of Merit last year.

But he knew he was close – he was listed as first reserve for the 78-man field and last week learned the withdrawal of England’s Andy Sullivan meant he was ‘in’.

He is hoping this could prove the ideal stepping stone to a spot on the Japan Tour where he wants to earn playing rights via their Tour School in coming weeks.

“No one pulls out of these sort of events so when I was first reserve I thought I was just going to miss out, but I’m pretty excited by the opportunity,” Millar told a Canberra newspaper.

“You’re realistic about your chances, especially with the quality of players that you’re sharing the locker room with. This is what you want to play for; you want to play in the best fields and try to compete.”

“If you do well, it’s a great feather in your cap. I haven’t had an awesome opportunity like this one since I qualified for the British Open in 2011.

“Guys like Dustin Johnson, Rory McIlroy, Henrik Stenson will be damn hard to beat. But if you’re not in the field, you can’t beat them.”

Millar was named player of the Australasian tour last year thanks mainly to 11 top-10 finishes and winning his first tournament – the New Zealand PGA.