After 72 holes, the two players were locked in a tie at 3-under par, and went back to play the par-5 18th hole to decide the championship.

Theegala hit his second shot to the back edge of the green, hole high. Lee flared his second shot into the trees on the right, and after a free drop from an embedded lie punched a remarkable 150-yard shot through the trees to 45 feet from the hole. Lee then two-putted for par, and Theegala dropped a 5-footer for birdie and the win.

Theegala started today’s final round with a five-shot lead, but with the swirling winds adding to already difficult final-round playing conditions, the day quickly became a game of survival. The scoring average for the final round was 77.27.

By the 11th hole, Theegala’s lead was gone. Lee, who had started the day seven shots behind Theegala and was playing in the group ahead of him, birdied the par-5 to grab a share of the lead.

Theegala then began a series of scrambling shots that would make the difference in the championship.

He then put his tee shot on 14 against the lip in a fairway bunker, powered the shot out, and hit a flop wedge to six inches for par.

On 15 his 90-yard wedge missed the green, but again pitched the ball to a foot for par.

On 16 he pushed his tee shot into the right trees, and his second shot hit a tree and ricocheted back into the bushes, from where he took a free drop from a cart path; he then punched his third shot short of the green, chipped on and one-putted for bogey. 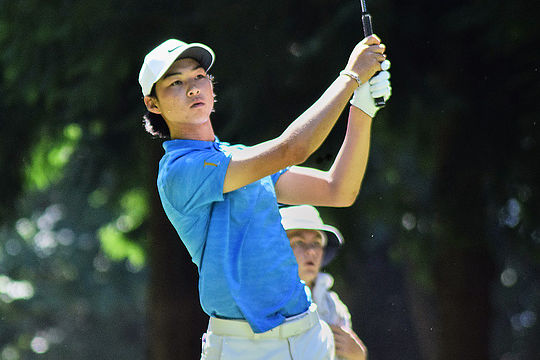 “I was hitting the ball in some of the worst places possible,” Theegala said. “I was all over the place, and saving pars from places I thought no way was going to happen.”

On 18, the uphill par-5, he watched as Lee birdied to tie him. Knowing he needed to make birdie for the win, his second shot landed in the right greenside bunker. He couldn’t get up and down, and the two walked back to the 18th tee for the playoff.

Theegala shot 6-over 78 in today’s round. When asked if he thought he could win a tournament by shooting a 78 in the final round, he said with a laugh, “No way.”

Theegala is a rising junior at Pepperdine, finishing his sophomore year as WCC Co-Player of the Year and selected as semifinalist for the Jack Nicklaus Award. He qualified for this year’s US Open at Erin Hills, and in two weeks will compete in the 51st Pacific Coast Amateur Championship, being held at Chambers Bay in University Place, Wash.

Lee was the only player in the 66-man field to break par in today’s final round. He was the first-round leader, opening with a 4-under 68.

“At the end of the day, I’m happy to have been in the position I was in,” Lee said, after the playoff. “To start the round so far behind and come back like I did, that’s something. I knew the scores were not going to be low, and I knew if I could just stay somewhere around par, I might have a shot.”