While Tiger Woods was enthralling the patrons with his unlikely return and Rory McIlroy was carving up the Augusta National layout with a record-equalling 64, Western Australia’s Min Woo Lee was quietly putting together a T14 result in his first-ever Masters tournament.

The big-hitting 23-year-old entered the final round at 4-over and at that point was just happy to be playing on the weekend after missing four out of five cuts on the PGA Tour this year. 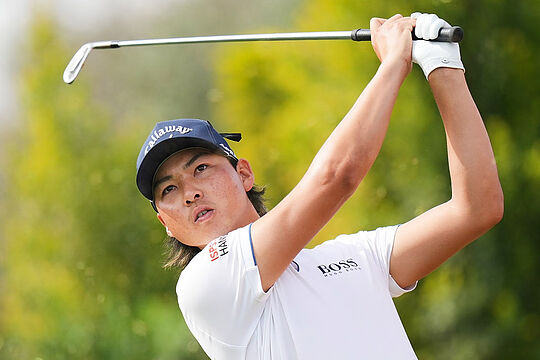 Lee got the first hole out of the way with a par before pulling off a 346 metre drive at the par 5 2nd hole to set up an eagle chance after a superb approach shot left him just over a metre from the hole.

A string of birdies between the 6th and 9th holes saw him equal the lowest front-nine score at the Masters and the two-time European Tour winner was suddenly back in the mix at 2-under and a share of 4th place heading to the back nine.

Unfortunately that was the last of the good news for Lee with four bogeys from the 10th hole undoing most of the good work from earlier in the round. A bogey at the par 3 16th was matched with a birdie at the following hole to finish the day on 2-under 70 and 2-over for the tournament.

“Coming into this week I wasn’t, obviously, playing that well, so this place gets you on another level just because you’re in front of millions of people and you need to play good,” said Lee.

“I guess I didn’t feel that good with the putter, and the last couple of weeks I think I strokes gained on the putter a lot. So really positive vibes there. I’ll take a few weeks off now and work on a couple of things, but maybe a little celebratory drinks with the team tonight.”

Lee’s driving distance was impressive, averaging longer than the field in all but one round and he was equal second longest in the final round (330 yards) alongside Cameron Champ and just 4 metres behind leader, Will Zalatoris.

“Tied 14th on debut and an equal best front 9 scoring at Augusta! On a Sunday baby. A week that I wish never ended. Unreal experience, my first time playing at the Masters. I appreciate all the love and support I received over the week. Until next time, Augusta,” tweeted the World No. 52.

Lee can walk away with his head held high with many of his much-more experienced peers succumbing to the Augusta National course this week. He has the length and game to compete at the highest level and with the confidence gained from last week’s efforts, the sky’s the limit for the 23-year-old.