Western Australia’s Min Woo Lee has won the Aaron Baddeley Junior International in San Diego to finish at 17-under and five strokes ahead of fellow Aussie, Blake Windred.

Lee, 17, was coming off a winning performance at his debut amateur start in the US, where he shared gold medal honours at the Spirit International in Texas. This win in San Diego, his second from two starts in the US. 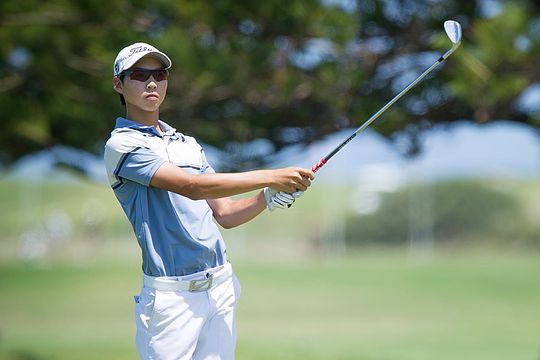 “I had a great week and was able to perform well,” said Lee.

“When I go to the US it’s kind of different to playing back home. You want to do well as it’s a long way to travel and once there, I feel I’m more focused to do well.”

“Two wins from two starts in the US was something I was not expecting, but my experiences from playing bigger events back in Australia where I was in with a change, yet did not finish it off, really helped me to get the results in the US.”

With another year left in the junior series, as well as finishing school, will keep Lee busy. Lee’s next main amateur event is the Australian Master of the Amateurs, our top world-ranked amateur tournament being held at Royal Melbourne starting 2 January.

“I’m looking forward to the Master of the Amateurs and playing Royal Melbourne,” says Lee.

“I want to do really well there, as well as the Australian Junior. Lately, everything has been working a treat. My driving is straighter and I’m putting better. Hopefully I can get another win back in Australia. That’s the plan.”