For the second week in succession, Australian golfers have dominated the leading two men’s tour’s with 22-year old Min Woo Lee becoming the youngest winner of the abrdn Scottish Open.

Lee, born and raised in Perth, Western Australia, very calmly rolled-in a 10-foot birdie putt at the first extra hole to claim the whopping €1.23m first prize cheque in the rain-affected event held on the Renaissance course to the east of Edinburgh.

Lee’s victory comes just a week after Victorian Lucas Herbert captured the Dubai Duty Free Irish Open and with Herbert sealing a second European Tour victory some six hours ahead of Sydneysider Cameron Davis winning for the first time on the PGA Tour, and also with a play-off success at the Rocket Mortgage Classic in Detroit.

Lee also will make his majors debut having secured one of three places on offer in Scotland for those not exempt into Thursday’s rescheduled 149th Open Championship at Royal St. George’s.

Lee headed into the final round of just his 41st European Tour event trailing three shots from the lead but burst up the leaderboard thanks to a blistering six birdies in succession from his third hole in an eventual seven-under par 64. 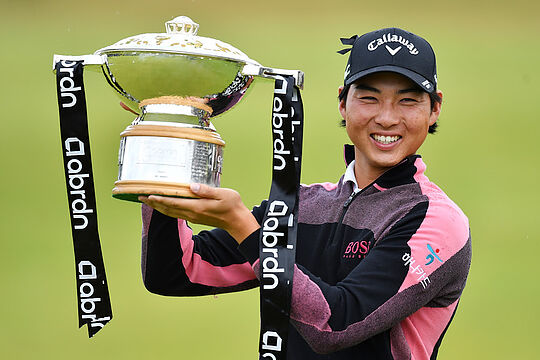 Heavy rain had halted the last day’s play with Lee enjoying a four-way share of second place at 17-under par and with three holes to play and with Belgian Thomas Detry leading at 18-under par with five holes to play.

Play resumed after a 90-minute delay for Lee to birdie the par-5 16th for a third day running to end at 18-under par and then wait on the practice range as first Detry (67) finished on 18-under before England’s Matthew Fitzpatrick (67) made in it a trio on top.

Lee won the toss to tee-off first in the play-off and smashed his drive the furtherest before then walking-up to his ball, and as he had done all week, take one look at his target and land his second shot to the left side of the pin.

Then as both Fitzpatrick and Detry missed their birdie putts, Lee rolled in his for a second Tour victory after a break-through win at the 2019 co-sanctioned ISPS Handa Vic Open.

Lee shook hands with both his two rivals and then became emotional, wiping back tears of joy as the enormity of his win began to sink in.

“It feels amazing to win. It was a long day. Someone said it was six hours and 20 minutes, and it did feel that,” he said.

“We had the rain delay and all that. So you know, it was a bit emotional holing that last putt.”

“I flushed the ball all weekend and flushed it all today. I just needed to kind of stay in the moment. I hit a lot of shots on command today and yesterday, and you know, I just chilled out next to the fireplace while I was waiting. You knew they made par on the 18th hole of regulation, and then went out there and did my thing.”

“It was nice. I mean, I just felt good. I did feel nervous, but more confident if anything”.

Among those Lee singled out for special praise was his family and Royal Fremantle-based coach, Richie Smith

“I owe so much to my family. I did it for my whole team. We knew the time was coming,” he said.

“I’ve been playing really well. Like I said, I just needed to get rid of some of the dings in my game. It was trending a lot leading up to this, and I mean, I owe it to my family. I owe it to my coach Ritchie Smith back home, and I’ve been with him a long time now.”

“So, just my friends and family. I’ve got such good support back home and on social media. I can’t wait to talk to them”.

And there was also the ‘comfort’ with Lee contesting the final round in the company of fellow Aussie Wade Ormsby, who sensationally aced the uphill par-3 12th hole to earn 104 bottles of Scotch whisky and finish in a share of 12th.

“It helped a lot playing the final round with Wade as I know him really well. We’re pretty good friends out here. He’s put me under his wing a little bit and helped me out. He’s just an awesome bloke,” said Lee

“Yeah, it was really nice to play with him. It might have been a different story if I played with Jon Rahm or any of the other guys up there. They are all high-ranked. It was nice to be with someone I’m comfortable with and I’ve played with.”

And what about making his Majors championship debut and now joining 10 other Aussies teeing-up Thursday at Royal St. George’s, and where in 1993 the great Gene Sarazen handed Greg Norman the famed Claret Jug.

“If you told me which major I would want to win, I don’t really care,” he said smiling.

“I’d win any of them. But I’d probably say the Masters. But The Open, after playing in Europe and getting to know all the European guys, and they all say The Open. So it’s a special place in my heart and hopefully I can play really good next week.”

“It’s awesome that there are so many Aussies competing this coming week. I will get to see old friends and get to see friends. I know some of my friends are out there right now and they have shown it on social media, so I’m excited to go see them”.

Lee’s win, the 137th victory on the European Tour by an Australian, should see him move 240th up to a career-high of 59th on the Official World Golf Ranking. His previous-best ranking was 129th in February 2020.

Last week’s winner, Lucas Herbert, shared equal 4th and finished just one shot outside of the playoff. Herbert’s nemesis this week was the second hole at the The Renaissance Club, which he bogeyed in every single round this week – the difference between back-to-back European Tour victories.

Wade Ormsby closed in a share of 12th place, while Scott Hend dropped seven places into a tie for 44th.