Minjee Lee has claimed her third career LPGA victory at the Blue Bay LPGA on Hainan Island, China after a tense final round struggle with playing partners Jessica Korda and Ariya Jutanugarn.

The 20-year-old West Australian began the final round tied for the lead with Korda and played near-flawless golf to card a final round of 70 to finish at 13-under 275, a stroke clear of Korda with Jutanugarn alone in third place at 11-under. 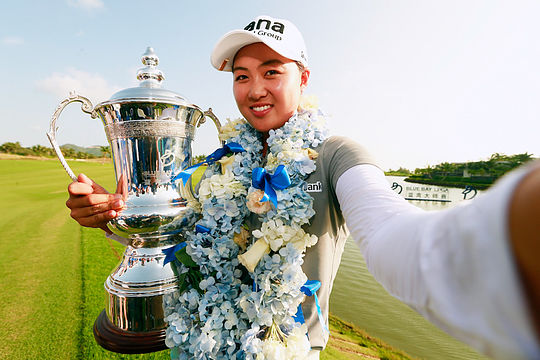 “Obviously because I won, I’m very happy right now,” said Lee, who broke through the US$1 million dollar mark in season earnings with the win.

“But yeah, going into the final round, I knew that it was going to be a good fight today. I had to really work for this win. I’m glad I came out on top, they’re great competitors.”

Lee held both the first and second round leads after shooting 65-67 but Korda came from seven-strokes back to catch Lee on Saturday, after Lee posted a 73.

Lee immediately reclaimed the lead on Sunday with a birdie at the first and a birdie/bogey swing in Lee’s favour at the 7th extended her lead to three.

Jutanugarn started to make a move with birdies at the 11th and 14th and when another dropped at the 17th and Lee three-putted for bogey, the world number two had drawn level with Lee heading to the par-five 18th.

However, a 6th win for the season was not to be for the Thai after she pulled her tee shot into the water, leaving the stage to Lee and Korda.

Despite making birdie at the last, Korda could not catch Lee as she too made four to take her second LPGA title of the season, after winning the Lotte Championship in Hawaii earlier in the year.

“I just put myself in good spots and then yeah, I ended up making birdie. Yeah, just stuck to my game plan.”

The other two Australians in the field, Su Oh and Sarah Jane Smith, finished tied for 50th and in 76th place as the LPGA moves on to Malaysia this week for the Sime Darby LPGA Malaysia at TPC Kuala Lumpur.