Western Australia’s Minjee Lee could be forgiven for thinking she was playing for second place coming into the final round of the Evian Championship, seven shots adrift of South Korea’s Jeongeun Lee6.

But as we have seen time and time again (yes, we’re looking at you 1996 Masters) anything can, and does, happen especially under the enormous pressure of major golf.

And the Aussie was able to prove that point, flipping the script on Lee6, and firing a 7-under 64 to force her way into a playoff and securing a major win at the first-extra hole for the equal biggest comeback in women’s golf history alongside Karrie Webb (2006) and Patty Sheehan (1983).

Lee now becomes the fourth Australian women to claim a major championship and the second in just the past couple of years following Hannah Green’s PGA Championship victory in 2019. 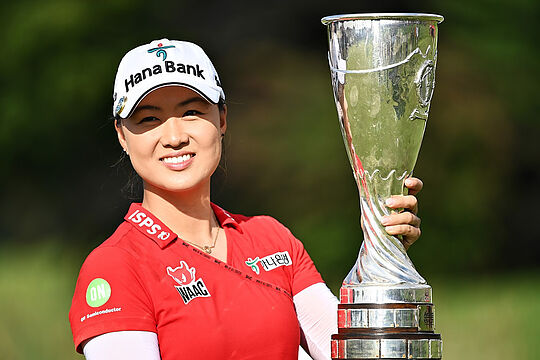 “I never really thought about it [winning] while I was playing, I just tried to make as many birdies as I could,” said Lee.

“I think I saw the leaderboard maybe once or twice. I just tried to play to the best of my ability, and it’s really great to win a major…it’s just really amazing.”

Earlier in the week Jeongeun Lee6 look set to cruise to a second major victory adding to her first and only LPGA win at the 2019 US Women’s Open.

The South Korean opened with a 66 before posting a record-setting 10-under 61 on Friday for a seven-shot clubhouse lead but three-under by the end of the day. Her 15-under 127 total broke In Gee Chun’s 36-hole record by two strokes and was also a shot better than Brooks Koepka’s 128 total at the 2019 PGA Championship.

A 68 followed on Saturday, leaving Lee6 with a five-shot lead over American Yealimi Noh going into today’s final round. However, the pressure took its toll with five bogeys coming between the third and ninth hole of her final round before Lee6 pulled off a miracle three birdies in a row over her final three holes to sign for a 71 at 18-under alongside Minjee Lee.

The excitement was short-lived however with the 25-year-old finding water with her second shot at the par-5 first extra hole to hand victory to Lee, who put her approach shot inside 2-metres and lipped out for birdie to secure her 6th LPGA win.

The $675,000 first prize money takes Lee’s 2021 earnings close to the one million dollar mark and nudging her career-prizemoney to almost US$8 million.

Sarah Kemp was the next best of the Australians in a share of 19th place with recent Ladies European Tour winner, Stephanie Kyriacou, the only other Aussie to make the cut in equal 65th.

Katherine Kirk and Su Oh sat out the weekend.

Lee will now make a quick trip home to the US before turning around to head for Japan along with Hannah Green as part of the Australian golf team at the 2020 Olympics. The women’s golf tees off on August 4 at the Kasumigaseki Country Club in the north-west of Tokyo’s outskirts.