Australian golf’s two brightest female stars are locked in for next month’s Oates Vic Open at 13th Beach Golf Links, with rising LPGA Tour players Minjee Lee and Su Oh committing to teeing it up in Barwon Heads from February 9-12.

The announcement further strengthens the women’s side of the 2017 Oates Vic Open, following the news that the Ladies European Tour will co-sanction the event. 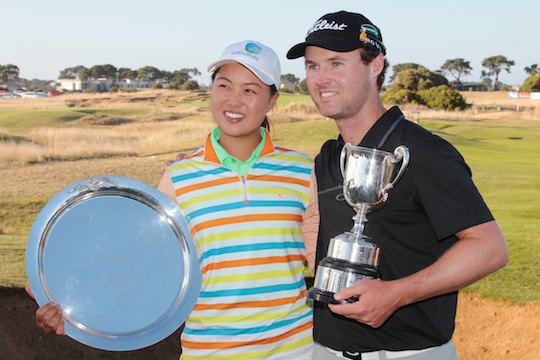 World Number 17 Lee is hoping to replicate her historic 2014 triumph at 13th Beach, which saw her become the first female amateur to win the event.

It was Lee’s first win in a professional tournament and spring boarded the 20-year-old to three titles on the world’s toughest circuit over the past two years.

“The 2014 Oates Vic Open was a great confidence booster for me going forward in my career,” said Lee.

“I was able to realise that I could compete with the professional girls and have been moving forward from there.

“Coming down the last hole seeing all the big crowd, my family and friends watching me finish was really special to me, especially because it was my first professional win.”

The Oates Vic Open is the only golf tournament in the world where both the men’s and women’s fields compete simultaneously and with the increased $1 million prize pool, the strongest field yet is assembling in a big month for Australian golf.

“It’s going to be a really fun event, especially having the women and men playing at the same venue,” said Lee.

“We don’t have anything like this on the LPGA so it’s a nice change. It’s the place I won my first pro event so I have great memories there and it’s going to be awesome to go back.”

Lee’s graduation to the LPGA Tour meant she didn’t get the chance to defend her crown in 2015 but will make her first trip back to Barwon Heads in February with her younger brother in toe.

18-year-old Min Woo, who claimed the US Junior Amateur Championship in 2016, will now get the opportunity to tee it up alongside his big sister next month.

“It’ll be great to have the whole family altogether at the same venue,” said Lee.

“I don’t usually get to spend lots of time with the whole family playing on the LPGA full-time so feeling really lucky we get this opportunity.”

The three-time LPGA Tour winner may also get a chance to walk the fairways with fellow 2016 Rio Olympian Oh, after the young Victorian also signaled her intention to play in her home state’s Open just a week out from the ISPS HANDA Women’s Australian Open.

Oh is coming off the back of a breakout year in the US, a string of good results against the world’s best enough to secure her LPGA Tour card for the upcoming 2017 season.

The highlight was a runner-up finish at the Kingsmill Championship in May, coincidentally the scene of Lee’s maiden US crown just 12 months earlier.

But Oh’s surge into the top 50 in the world rankings also began at the Oates Vic Open, after a narrow runner-up finish in 2015 to eventual champion Marianne Skarpnord.

A trio of bogeys over her final three holes forced Oh to settle for a share of second, no doubt leaving her with plenty of motivation next month.

The Oates Vic Open is a sanctioned event on the ISPS HANDA PGA Tour of Australasia, ALPG Tour and the Ladies European Tour.

The final two rounds will be live streamed on Facebook LIVE and at www.vicopengolf.com