World number three Minjee Lee has cruised to victory in the Rene Erichsen Salver held at the Glenelg Golf Club in Adelaide finishing at 9-under for the tournament. 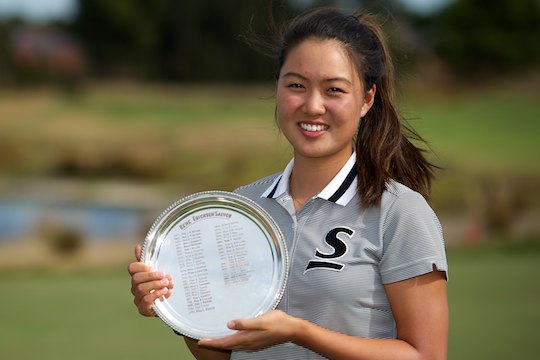 Lee’s second round 65 a course record bettering the previous best low-round at Glenelg by three strokes.

“I was a fun week and I really enjoyed the course,” said Lee.

“I played well in the corporate day then came out in the first round and struggled a little. Then my putting go better and I had that great second round which set me up from there.”

Lee is certainly making headways since winning the 2012 US Girls Junior title where in the process became the first Australian to win that title.

Earlier this year Lee added the Australian Amateur crown to her expanding list of achievements and this week enter the tournament relishing the opportunity to play another four-round tournament on a challenging layout such as Glenelg.

“It was tough but at the same time fun out there,” said Lee.

Lee is happy to bide her time in the amateur ranks. She turns 17 in May and is looking forward to another successful tour this year in the US.

“I have still a lot of opportunities with golf. Next week I have the Australian Junior and I am looking forward to playing that. Then I will head to the US and play the US Women’s Amateur, Girls Western and the US Junior.”

Lee became a major force in Australian amateur golf in 2010 as a 14 year old. That year she became the youngest ever winner of the Western Australia State Amateur Championship.

In 2011, Minjee came pretty close to winning the Australian Amateur Championship, loosing on the 38th hole in the final. She made the semifinal in 2012, but lost to Lydia Ko, who went on to take the title. Then came victory at the US Girls Junior.

“I am maturing more as a player,” said Lee following Sunday’s victory.

“I am learning how to play harder courses better and certainly my short game has improved since winning the in the US.”

Lee’s victory in South Australia on Sunday was impressive.

Crisp iron play, coupled with great putting, separated Lee from the rest of the field as they struggled around the challenging Glenelg layout.

The fact Lee was the only player to finish under-par at 9-under is testament as to how well she played.

“It was a great victory for me,” said Lee.

“I played the golf course and took it on. In the end I come away with plenty of confidence as to where my game is going. It feels good at present and with a number of big events coming up, I am feeling confident.”