Western Australian Minjee Lee has rebounded from a disappointing third round to fire the round of the day on Sunday to claim a one shot victory at the LOTTE Championship on the island of Oahu, Hawaii.

Lee evoked memories of Peter O’Malley’s finish at Gleneagles to win a Scottish Open with a tearaway back nine that included an eagle and four birdies for an eight-under par 64 and a 16-under par total. 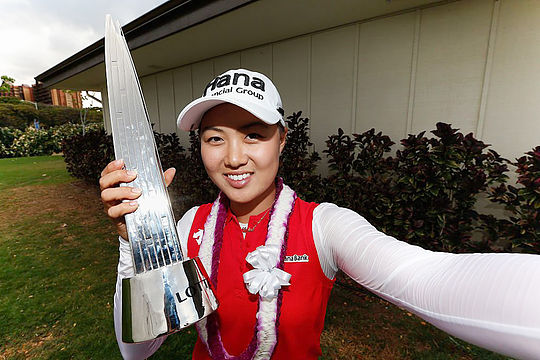 “Well, yesterday I spoke to my coach and he was like, ‘You’re only five back. Just shoot 8-under and you’ll be fine’,” Lee said after claiming her second career title. “And I shot 8-under, so that was good.”

19-year old Lee started her day five strokes adrift of leader Katie Burnett after shooting a third round two-over 74 and started strongly with a birdie on the first. However, the real fireworks were to come on the back nine.

“I think after I went eagle, birdie, birdie, I think the second birdie I was like, ‘Oh, I’m going to be really close’,” Lee explained. “I just did all I could do and, yeah, here I am.”

A birdie on her 71st hole took Lee to the lead and her second trophy in just her second full LPGA season.

With the win, Lee becomes only the fifth player in LPGA Tour history to capture multiple victories before her 20th birthday, joining a list which includes Lydia Ko, Lexi Thompson, Marlene Hagge and Sandra Haynie.

“(It’s) Definitely a big confidence boost,” Lee said after taking just 22 putts for the round. “Last couple of weeks, I was there but not quite there. Now my game seems to be coming together really well.”

Burnett and In Gee Chun, who each missed long birdie putts on the 72nd hole to potentially force a playoff, finished tied for second at 15-under, while Moriya Jutanugarn (-14) and Su-Yeon Jang (-13) rounded out the top-5.

Sarah Jane Smith finished the next best of the Australians in a tie for 39th at 3-under while Su Oh (T47th), Sarah Kemp (T59th) and Katherine Kirk (T62nd) each made the cut and completed all four rounds.

The LPGA moves to San Francisco this week for the 3rd Swinging Skirts LPGA Classic at the Lake Merced Golf Club, where world number one, Lydia Ko, is the defending champion from both 2014 and 2015.