One of the misfortunes of having the name Keith Mitchell is that your locker could, quite easily, finish up being right next to the great Phil Mickelson, should you be playing the same tour event.

And that’s exactly what happened to Mitchell at Quail Hollow late last week when he was preparing to play in the pro-am for the Wells Fargo Championship on the US Tour. 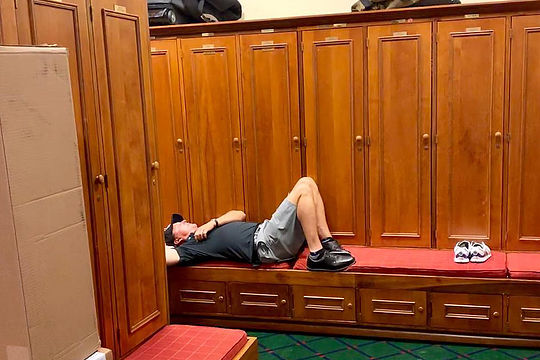 Keith Mitchell is faced with a tough decision (Credit: Instagram)

The only problem with that was Mickelson had fallen asleep beside his locker…just catching up on a few zeds as life on the hectic PGA Tour was catching up with the 48-year-old.

That left Mitchell in quite a quandary…did he wake up Mickelson so he could gather his things, some of which “Lefty” appeared to be sleeping on…or does he go out and play golf in his street shoes.

It’s not as if the 2019 Honda Classic champion had no profile on the tour…it’s just that he was more concerned with what Phil might do to him iof he woke him up.

Mitchell told US Golf Digest he was left to consider one of three options, which were:

Mitchell was even sure that Mickelson would know who he was.

Mitchell, we’re told, made the pro-am but we’re not sure what shoes he was wearing.