Keith Mitchell not only picked up his first PGA Tour victory Sunday at the Honda Classic, but he also collected nearly US$1.3 million for his victory. Yet is was not easy as the American overcame tough challenges from three-time major champion Brooks Koepka and Rickie Fowler.

Mitchell birdied four of his final seven holes, including nailing a 8 metre birdie putt on the 18th, to shoot a 3-under 67 for a 9-under-par total and a one stroke victory.

Mitchell began the day tied for second before dropping shots on the first two holes yet rebounded brilliantly over the back nine drawing on his experiences having played on the PGA Tour, Web.com Tour and the PGA Tour Latinoamerica but never won.

Mitchell was able to secure his maiden PGA Tour win from 97 attempts as a professional and from 40 alone on the PGA Tour.

The 27-year-old, who came into the week ranked at World No. 162 and coming off three missed cuts in his last four starts, certainly turned his fortunes around with a career back nine against two of the hottest players on tour. 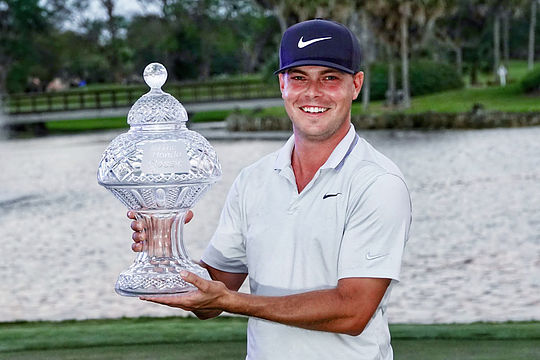 “I know Rickie’s young and Brooks is young, but they’ve been out here so much longer than me. I’ve been watching them since college and junior golf. They’re both great ambassadors of the game. Having my name next to theirs is an honour in the first place.”

“On 18 I was just trying to focus on what the putt was doing and my read and my speed. I hit a great putt. It got the result I wanted.”

Mitchell has been close before on tour, yet has never managed to get the “W”.

He lost a three-man playoff in Brazil on PGA Tour Latinoamerica in 2015. On the Web.com Tour he secured a tie for third in the News Sentinel Open in his home state of Tennessee and in his rookie season on PGA Tour a year ago, he was solo second in the Dominican Republic.

His last top-10 finish before Sunday was a T7 at the John Deere Classic last July.

Mitchell now moves inside the top 70 to World No. 68, his highest ever world ranking by quite some margin having never been above 130th place previously.

Matt Jones was the best of the Australians finishing in a share of 36th position while Cameron Davis finished at 3-over and in a share of 59th in his Honda Classic debut.

The rookie has now advanced to the weekend for the eighth time this season in his 11th start. Davis entered the week after a season-best T16 at the Puerto Rico Open.

Curtis Luck entered the week with his season-best T25 at the Puerto Rico Open, yet missed the cut for the sixth time in his 10th start of the 2018-19 PGA Tour season.