Francesco Molinari held his nerve in a final-day battle with Danny Willett to claim a historic victory at the Italian Open.

The home hero recorded a closing 65 to get to 22 under and beat Willett by one shot, becoming the first Italian to win his national Open twice since the event became part of the European Tour in 1972. 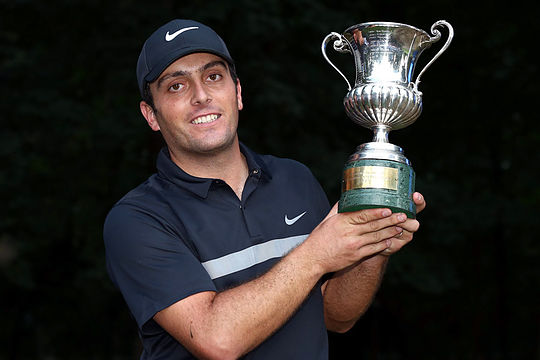 The 2006 champion also became the first Italian to win any European Tour event twice as he claimed his fourth win and his first since the 2012 Reale Seguros Open de España in 2012.

Followed by an enormous gallery, he turned in 31 and held a four-shot lead with six holes to play but Masters Tournament winner Willett is made of stern stuff and went birdie-eagle on the 13th and 14th to cut the gap to one.

There were nervous moments from both players in the closing stretch but Molinari held on to become the second home player to win their national Open in as many weeks after Joost Luiten’s victory at the KLM Open.

Molinari put his approach on the first to 15 feet and holed a curling right-to lefter for an eagle and a two-shot lead.

Willett responded with a birdie on the second but Molinari followed him in from five feet and sent the home crowd into raptures once more.

Willett missed a golden chance to apply the pressure after putting his approach to three feet on the 11th and Molinari punished him on the next, putting his tee-shot to six feet and moving four ahead.

There was a two-shot swing on the next, though, as Molinari left his second shot short of the green and missed from three feet with Willett making a birdie.

Molinari picked a shot back up on the 14th but Willett hit a stunning second shot to 12 feet for an eagle and all of a sudden, the gap was cut to one.

Both men were ragged off the tee on the last but Molinari produced a sensational approach and Willett a brilliant clutch putt for a pair of pars that sparked emotional celebrations.

Elvira finished with a 65 while Paisley recorded a 68, with countrymen Bland and Horsey signing for rounds of 69 and 65 respectively.

The European Tour now heads to Germany for the €2,000,000 Porsche European Open.