Last week they were hailing Italian Francesco Molinari as the first Italian to win on the US Tour in 71 years.

The first since Naples-born but American raised Toney Penna in 1947. 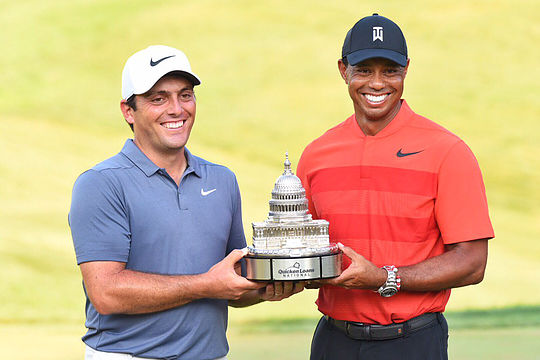 Yet that was downplaying the World Tour events that have been such a hit world-wide.

Molinari won the HSBC Champions event in Shanghai in 2010, a World Golf Championship event and the biggest win of Molinari’s career.

While his success in winning the Quicken Loans National by eight shots was super-impressive, the Italian has threatened just such a victory for quite some time.

The PGA Tour finally put a WGC event outside the US but it appears they did not recognise the HSBC Champions as an official victory until 2012.

It even got Molinari to Kapalua, Hawaii a few months later for their Tournament of Champions, reserved for winners on their tour.

And it still bothers Molinari that his win didn’t count as a PGA Tour victory…despite beating Lee Westwood, who was then the No. 1 player in the world.

And for good measure Tiger Woods, Rory McIlroy and Phil Mickelson were in the field and Molinari smashed them.

“When everyone was saying I never won on the PGA Tour, I felt like saying, ‘Well, technically, it was pretty much a PGA Tour tournament’,” said Molinari.

“But yeah, it’s just a formality, and I think it’s different anyway to win on US soil. So that win felt special.”

It seems a year after the Italian star’s win, the PGA Tour declared it [the HSBC Champions] would count as official provided a PGA Tour member won.

No doubt the Tour was answering to Americans complaining that it gave international players a quick avenue to a PGA Tour card.

They obviously ignored the fact the winner beat some of the strongest fields in world golf.

Ian Poulter won in 2012 and it did count as a PGA Tour victory.

And, yes, all were PGA Tour members.