After a Palmer-like charge through the field, the Italian golfing hero finished his round just over 90-minutes before being fitted with the winning Palmer-like red cardigan. 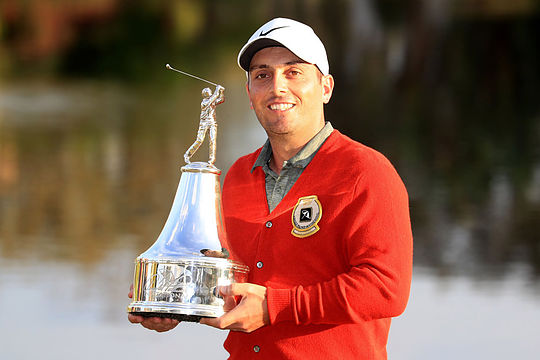 The 36-year old was confirmed the winner when England’s Matthew Fitzpatrick, playing in the last group, wrapped-up a 2020 Tour card in finishing runner-up with a closing 71 and a 10-under par total.

The win is Molinari’s third on the PGA Tour and the 10th of his career and it comes just a handful of months after he was crowned European No. 1 and was voted the Association of Golf Writers 2018 ‘Golfer of the Year’.

Molinari recorded just 24 putts in his round, including 10 one-putts and not needing his new Odyssey putter when he chipped-in at eight.

And there was none better than Molinari’s 23-foot birdie gem at the last, a putt we’ve seen Tiger Woods hole on a number of occasions in winning no fewer than eight Palmer-hosted events.

He said: “It is very special for to win here at the home of Arnold Palmer.”

“My putt there at the last was pretty iconic putt and I’m pretty sure I’m the first guy to make it with the flag in though, so that’s the real difference.”

“I was just trying to lag it close to the hole and it came out on a great line and maybe a little firmer than I wanted, but the line was just right and incredible to see it going in.”

“I’ve seen so many putts on TV like that on 18, including Tiger, and to do it yourself it’s really amazing.”

“So, to have a round like this today and to be handed a second trophy with Arnold Palmer’s name on is very special.”

“And after being in the winning Ryder Cup team it’s great to win very early in a new season. I worked hard over the Christmas period so to win a event very early in a season is hopefully a sign of better things to come this year.”

“My first week as a Callaway player, so happy to see that the switch I made wasn’t as crazy as some people thought. I know the clubs are good for me and I showed it this week.”

Last year’s Carnoustie victory hero should now move back to No. 7 in the world.

Sadly, Rory McIlroy ended his defence an after-thought managing just two birdies in a score of 72 for a distant share of sixth place at eight-under par

Aaron Baddeley fell away on the final day, finishing in equal 17th following a final round 74 while Marc Leishman moved up nine places to close in a share of 23rd.

Jason Day was the only other Australian in the field but the former world No. 1 was forced to withdraw during the first round with a back issue.