Runners up in 2009, the tight Mona Vale outfit had to endure final hole nerves as Adam Batty and Bonnie Doon’s Troy Moses, playing number two, were left to battle the title out over the last three holes. 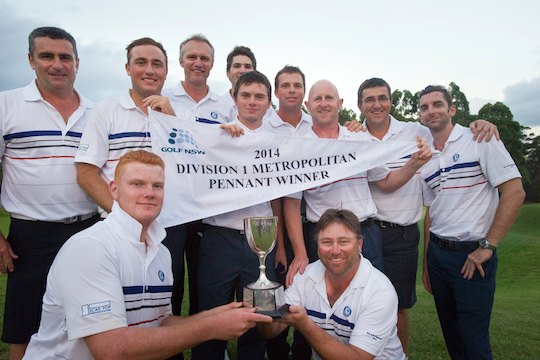 Batty had secured a two hole buffer with two to play following a superb up-and-down from a plugged bunker lie from the 16th green side bunker to seemingly ensure Mona Vale’s first flag.

Yet tense scenes would follow after Batty push his approach into the water hazard on the 17th green opening the door for Moses from which he took full advantage of the opportunity.

After Moses rolled in a three footer for a win the pair headed down the last with Batty cutting his drive onto the 10th fairway at Terry Hills and Moses perfectly placing a 3 wood to centre fairway and 140 metres to a tight place left hand pin location.

Batty needed to play a blind approach shot over trees and flew the green leaving a delicate up-and-down after Moses’ approach landed pin high and 10 feet from the hole.

In similar circumstances to this shot on the 16th earlier Batty had to play the perfect chip shot and he did just that landing to within 6 feet of the flag. When Moses missed his birdie opportunity, Batty needed only to make par and Mona Vale’s first every Major Pennant title would be in the Club’s hands.

In front of hundreds of supporters, Batty rolled in the putt of his life. Three feet out and Batty knew it was in the hole as he fist pumped the air and let out an ‘Adam Scott’ style roar as built up emotion came rolling out for a 1-up win and the title.

Mona Vale came searching for its first major Pennant flag in the Club’s history and Batty had delivered the winning putt. Scenes of joy and celebration rolled onto the 18th green at Terry Hills, the underdogs victorious over the much-touted Bonnie Doon team.

This was a final which could have gone either way, the standard of golf and the spirit in which the matches were held was commendable. Victory had fallen Mona Vale’s way. The joy was obvious in the players and supporters faces and laid to bed the disappointment of losing to Moore Park in the 2009 final.

Wins by Dale Brant-Richards over Jordan Junic, 3&1, in the top-order match followed by Andy Hugill’s stellar 4&3 win over James Grierson at number 4 and Mark McInnes win at number 7, had secured Mona Vale’s three vital matches to enable Batty to get across the line.

In the Women’s divisions, Concord was too good for Pennant Hills winning the Division 1 title, 3&2, and St Michaels won the Division 2 title over Oatlands, 4.5 to .05.