American Norman Xiong has taken out the Korn Ferry Tour’s Wichita Open at Crestview Country Club with a dominant five stroke victory finishing at 26-under, the lowest final 36-hole win in tournament history. 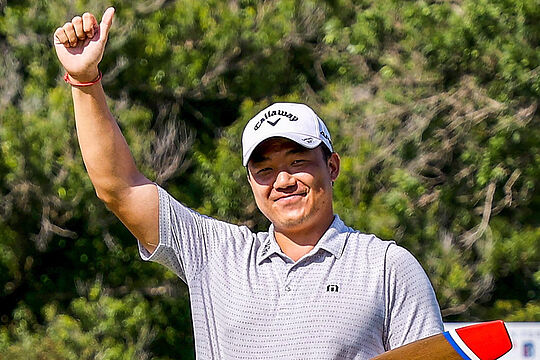 Xiong entered the final round atop the leaderboard, one stroke ahead of Kevin Yu who sat in solo-second, but fired an impressive final round 63 with Yu dropping to third place after Kevin Roy carded a final round 64 to take outright second place.

The 23-year-old Xiong had began the week without status on the Korn Ferry Tour and having to Monday qualify, only to walk away with tour status.

“I really don’t know how I’m feeling just because I didn’t really expect to be here,” said Xiong. “I just knew I couldn’t really let up today. I think that just shows how tough it is out here, and I think you can only recognise how much of a battle it is for all these players out here. It’s a really tough sport.”

Sunday’s win will be career changing for Xiong who previously had just twenty-four Korn Ferry Tour starts on his resume since 2018 with 17 missed cuts. A standout collegiate and former Walker Cup player, Xiong played 10 times on the PGA Tour, with a best finish of 26th in the 2018 Sanderson Farms.

He became the 25th Monday qualifier to win in Korn Ferry Tour history and the third to claim the Wichita Open propeller, joining Ben Crane (2000) and Sebastian Cappelen (2014).

Xiong was a former collegiate standout at the University of Oregon, where he was the 2017 NCAA Freshman of the Year and also played on the 2017 Walker Cup and Arnold Palmer Cup teams, competing alongside the likes of Scottie Scheffler, Will Zalatoris and Collin Morikawa.

“I guess this concludes Chapter 1,” said Xiong said following his win Sunday. “I feel so much different than I did when I was out here last year, a few years ago.”

The cut came in at 4-under with Brett Drewitt and Ryan Ruffels missing the weekend.