It’s easy to smile when you’re a winner.

Yet veteran Scot Colin Montgomerie could scarcely have been complimentary after winning the first-ever Champions Tour event in Japan last weekend. 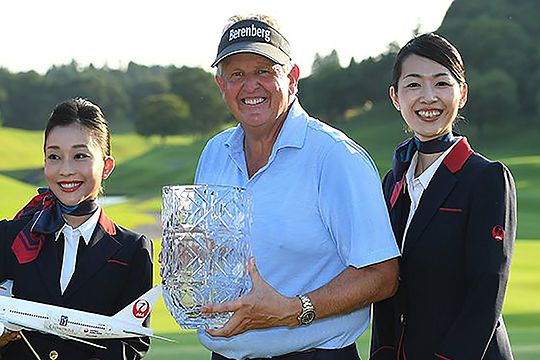 Starting to show something like his stellar form of last season following 10 weeks on the sidelines with torn ankle ligaments, ‘Monty’ suggested he was just beginning to get back to the form he was in for the past three years.

And his praise of the Narita Golf Club’s course was stunning after he won the Japan Airlines Championship by a shot from Americans Billy Mayfair and Scott McCarron.

“And we’ve putted on some great, great surfaces.”

“And the way the course was manicured was exceptional.”

Montgomerie finished at 14-under 202 for his fifth Seniors Tour victory and his first in almost a year.

“It’s a big deal, a very big deal,” said Montgomerie when asked about his tour’s first visit to Japan.

“It will be fantastic if that time ever comes.”

And it’s easy to see why he was a fan of the greens.

The popular Scot rolled home a 60-footer for birdie on the par-four 13th…one of three successive birdies which ignited his round.

“I think when I holed the putt on the 14th hole for my third birdie in a row, I felt that I then had a chance,” he said.

“I’m a big scoreboard watcher and knew I was leading. I just had to make sure I birdied 17 and par in, which I did,” said the man who won 31 times on the European Tour and topped the tour’s money list a record eight times between 1993 and 2005.