Moore Park added another Division 1 Sydney Metropolitan Major Pennant Flag to its collection with a 4.5 to 2.5 win over New South Wales Golf Club in the final of the series at Pennant Hills Golf Club.

The win is the Club’s third from five years and confirms the Club’s status as one of the powerhouse of Sydney Pennant golf.

“This is a tremendous effort from the team,” said Moore Park’s Team Manager, Adam Hayes.

“It was a team that included a number of rookie players like Jamie Hook at number 7 and Clancy Bowe from Ireland who played number 5 during the season. Coupled with that the fine efforts of Grant Thomas, who remains undefeated in the final series over the last four years and the efforts of our top order player, Lincoln Tighe, all the guys made their own unique contributions to the win throughout the season.”

Moore Park first match came with their number 7, Jamie Hook, with a 3&2 win over Andrew Grzetic. NSW was then able to secure a match back with their Captain, Ben Connelly, playing number 6 defeating Adam Kempt 2&1. The morning matches remained close and by the turn the final was still evening balanced.

“It was a fine effort there today from the guys,” remarked Max Lindsay, NSW’s Team Manager.

“Obviously the result was not what we were hoping for, yet beating the defending champions St Michael’s last week and to make this final shows that as a team we are heading in the right direction. We are now looking forward to next year.” 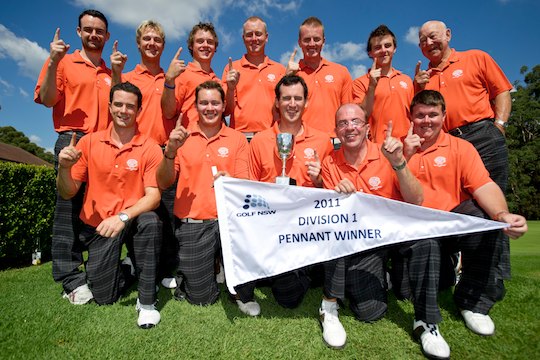 Moore Park’s middle order again delivered the goods during a Sydney Major Pennant final as Clancey Bowe playing at number 5 out lasted a determined Graham Blizard to win their match on the 17th sinking a tricky 8-footer for a 2&1 victory that effectively handed the Flag to Moore Park.

Luke Henwood at number 4 for Moore Park won his match 5&4 over Matthew Burns, while the efforts of Moore Park’s number 2, Grant Thomas, with his 5&4 win over Michael Bell ended a impressive season for the Captain.

Thomas has had an superb year winning the NSW Golf Association’s Champion of Champions at the recent NSW Amateur back in March, secured a 5th placed finish at the Avondale medal and secured a tied 7th in the NSW State Amateur medal.

Thomas is in his fourth year at Moore Park and in that time has recorded 30 pennant wins from 34 matches and has yet to lose a match in a major pennant final series.

With consistency of this nature, as well as the number of state player scalps that he’s accounted this season to keep his unblemished finals statistic, you would think State representational honours would not be far off for Thomas, as he’s certainly shown his got the game to defeat the best in the state .

Another impressive performance during these finals series also came from NSW’s Dean Van Kampen playing at number 3 with a 4&3 win over Jason Barby. Last week Van Kampen accounted for the 2010 NSW Medalist, Michael Williams, 2&1, and this pennant season won seven of his eight matches for NSW.

NSW’s number 1, Michael Lambert, remained undefeated in this series and in the process made a vital contribution towards NSW’s win over The Australian to set up the team’s final appearance with a 1-up victory over Ian Bradley during their Division encounter last month. With the final already determined by the Bowe/Blizard outcome, the Tighe/Lambert top-order match was declared all-square.

The results speak for themselves – three wins from five year – and Moore Park is quite rightly proud of its achievements in what is turning out to be a winning streak and complete dominance of Division 1 Sydney Major Pennants.