American Taylor Moore has claimed his breakthrough win on the Korn Ferry Tour at the Memorial Health Championship and in the process secured his first PGA Tour card.

Moore carded a final round 65 to finish at 27-under-par for a three shot win over fellow American Erik Barnes. The 27-under-par mark set a new tournament record at the Memorial Health Championship. 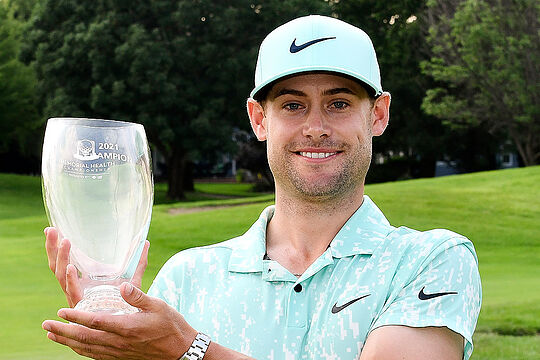 “Yeah, just a ton of excitement obviously,” said Moore. “Been trying to get a win out here for four or five seasons and to finally get it done means a lot. It’s even just icing on the cake for me that I locked up my first Tour card as well.”

“All in all, a great day. I had an awesome day out there, bogey-free, did exactly what I wanted to do and I was able to get it done.”

With Sunday’s win Moore moved to sixth in the Korn Ferry Tour points standings and passes the Tour’s threshold of 1,650 points that guarantees he will finish in the top-25 in the regular season, thus earning PGA Tour membership for the 2021-22 season.

Aussie Brett Drewitt finished in 6th place to be the best of the Australians and moved to 22nd on the rankings to be inside the top-25 who gain PGA Tour cards for next season.

The result was Drewitt’s seventh top-10 finish with three coming in his last four starts. Drewitt is obviously keen for another crack at the PGA Tour after finishing 196th in the FedExCup standings and losing his card in 2017.

Drewitt’s best finish on the PGA Tour was a share of 25th at the Safeway Open in 2018.

The remaining Aussies in the event failed to make the weekend with Harrison Endycott, Jamie Arnold and Brett Coletta all needing to bank some better results.

Curtis Luck is currently the next best ranked Aussie on the points standings at 60th and the only other Australian inside the top-75 who qualify for the Korn Ferry Tour finals come season’s end.

Endycott is narrowly outside the desired top-75 sitting at 77th, with Brett Colette at 84th. Ryan Ruffels is 92nd followed by Jamie Arnold at 106th.