American Ryan Moore defeated countryman Gary Woodland with a magical birdie on the first hole of a sudden-death playoff to win the CIMB Classic on Monday.

The 30-year-old Moore hit an exquisite eight iron approach shot to within three feet of the par five 18th hole at the Kuala Lumpur Golf and Country Club’s West course to claim his third PGA TOUR title in the US$7 million event sanctioned with the Asian Tour. 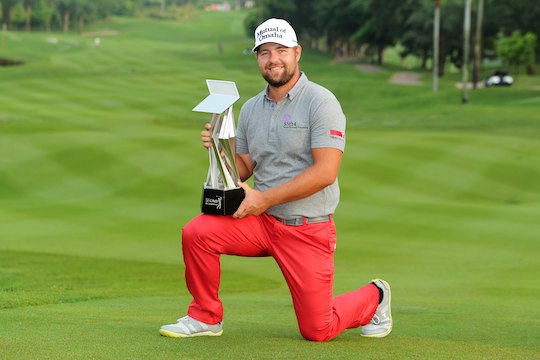 Woodland, who had missed a birdie putt on the 72nd hole on Sunday evening for the victory, missed the green in regulation and then left his fourth shot short of the hole to settle for the runner-up place.

“Playing a play-off with someone like Gary, I know I don’t want it to last very long,” said a delighted Moore, who won the top cheque of US$1.26 million in what is Asia’s first official FedExCup event.

The Las Vegas-based Moore said he was pumped up for the play-off after making a crucial par save on the 72nd hole in near-darkness on Sunday after a wonderful approach shot as well.

“Sleeping was not a matter of the fact that I had to come back and play a play-off this morning and try and win a million dollars. It was the fact that I was a little bit jacked up because I just made an amazing up and down on the 18th hole to just tie and even get into it.”

“So I just had that little bit of adrenaline, so it was more getting that out of the system than nerves for this morning,” said Moore, who is ranked 31st in the world.

Woodland, who was chasing his third PGA TOUR title, was disappointed he came up short against Moore after both players ended regulation play on 14-under-par 278.

“It was tough. It was a long hole, and Ryan hit a great shot in there and obviously made a good birdie. But I thought I hit a pretty good shot on the third, just obviously coming out of the rough, I would have like to have been in the fairway, came out of the rough and came up a little short,” said Woodland.

He said he would not have hit his birdie putt any differently on the 72nd hole during the final round which would have sealed victory for him.

“I’d like to make that putt. I hit it where I wanted to, it just broke more. I can see it now, it was a little lighter out right now, I can see it broke a little more, but it is what it is. I hit a good putt, and it just didn’t go in,” said the 29-year-old.

One of the longest hitters on Tour, Woodland took the safety first approach in the play-off with a long iron off the tee but pushed his second shot into the rough. From there, he struggled home as Moore cruised to victory.

“I really enjoyed my time here. Obviously I played pretty well, just came up one shot short. All in all it was a great week, something to build on, and look forward to coming back.”

Aaron Baddeley finished the best of the Australians in a tie for 5th place following a final round 6-under 66.