Queenslander Jed Morgan has gone one better than his runner-up finish at the Queensland Junior a fortnight ago to claim the 2016 NSW Junior Boys Championship at Shelly Beach Golf Club last Friday.

After weather delays on Thursday reduced the tournament to 54 holes, Morgan resumed play on the 6th and started with a birdie. 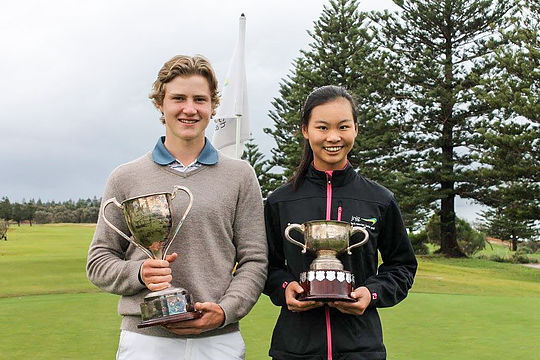 On the 7th hole the Queenslander nailed an eagle two which moved him to the top of the leaderboard.

But when Morgan’s shot into the 17th hole went over the green and out of bounds a double bogey resulted but he retained the lead by a stroke and a par on the last was enough to close out the win.

Morgan finished the tournament with a 3-over-par total, a stroke ahead of New Zealander Shaun Campbell, with Victorian Andre Lautee in third position at 5-over.

The Girl’s Championship was a tightly fought affair with Concord’s Belinda Ji claiming the title with a 7-over total and a two stroke victory.

Overnight leaders Stephanie Kyriacou from NSW and Victorian Linley Ooi dropped shots coming in during difficult day for scoring, finishing in a share of second at 9-over.

Five players were only a shot further back in a tie for 4th at 10-over, including Sheradyn Johnson (Victoria) who closed with the best round of the tournament, a 3-under par 72 which included four birdies and an eagle on a cold and wet day.