It was a day of Finals this week at the 2011 Women’s NSW Senior Championship, held at Cromer Golf Club. 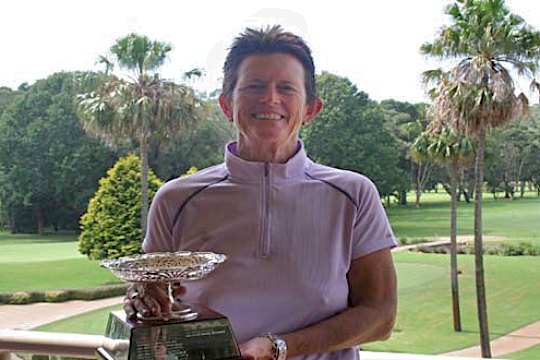 Both players started well, with the match square after three holes.

However it was Donohoe who took the early lead, going to 1up after the 6th hole. Morgan continued to fight, and after 9-holes it remained at Donohoe 1up. The lead crept to 2up after 12, and remained 2up after 15.

In a fantastic turn-around, Morgan won the 16th and 17th holes to square it up going into the 18th. It came down to the final putt, with Donohoe needing to hole from 3 feet to force it to the next hole. The putt rolled out, and subsequently handed Morgan her first Women’s NSW Senior Championship title.

It was no mean feat to defeat Donohoe, who has won the Championship an astonishing six times previously.

Understandibly Morgan was thrilled with the win.

“Sylvia is a fantastic player”, she said, “so to get the victory is just fantastic. It was a great match.”

Morgan thanked her caddies and especially the ground staff who did a fantastic job in getting the course into playing condition despite the rain throughout the week.

Shirley Walsh (Belconnen Magpies Golf Club, ACT) was 3 up after 12 holes, however Sandra Gillies (Long Reef Golf Club) fought back to be square after 15. The pair continued to tussle, however an incredible chip in on the 17th for Gillies, secured her the match 2&1.

It was a tight battle in the 56-59 years division, however it was Johanna Carrigan (The Australian Golf Club) who came away the eventual winner, defeating Dianne Hoschke (Bayview Golf Club) 3&1.

The 2012 Women’s NSW Senior Championship will be held at Coffs Harbour Golf Club with dates yet to be confirmed.