Collin Morikawa has created history after capturing the season-ending DP World Tour Championship and also becoming the first American-born full tour member in the 49-history of the European Tour to be crowned No. 1.

Morikawa produced a sizzling closing seven holes coming from outside the top-10 through 11 holes to produce a round of 66 and in the end comfortably winning by three shots at 17-under par in heatwave conditions on the Earth Course at Jumeirah Estates.

It is the reigning Open Champion’s first ‘regular’ European Tour success, his third victory in 2021 and his sixth overall as a professional.

Though it was not as easy as it would seem for the 24-year old Morikawa with England’s Matthew Fitzpatrick predicted to win the coveted No. 1 crown when he raced to seven-under par through 15 holes. Though such talk ended when Fitzpatrick bogeyed 15 and 16 en route to a closing 66 for a share of second place at 14-under par.

“It feels so good. I would be lying to you if I said I wasn’t watching what Matt Fitzpatrick was doing today. Boy, did he put on a run. Props to him. Made a lot of birdies early on,” said an emotional Morikawa. 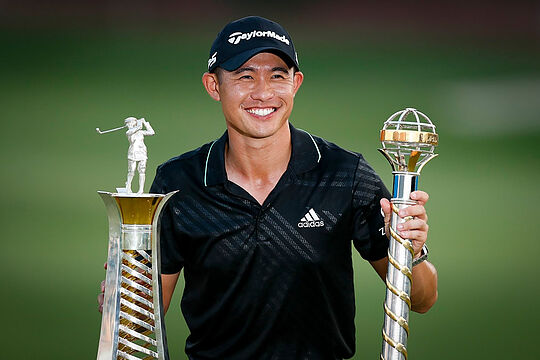 “But it’s 18 holes. All I needed to do was catch a spark. I feel great right now. Winning the DP World Tour Championship, coming here last year, my first time to Dubai, really special.”

“I started off with six pars, especially with some birdie holes, wasn’t fun. I felt like I was hitting some good shots and I wasn’t getting the breaks I needed. The putts weren’t dropping and I just told myself when I looked at the leaderboard after nine that I was still in there and I was still two or three back at that point and I just needed one spark.”

“After parring 10 and 11, after I told myself, you shouldn’t have done that; I knew something had to change. And 12, got a great break, thinning my second shot, made the putt, and that got the momentum started.”

With his wins at Royal St George’s Golf Club, the WGC-Workday Championship at The Concession and in the UAE, the World No.2 becomes just the the second player ever to win a Major Championship, a WGC title, a Rolex Series title and the Race to Dubai after Francesco Molinari, and the first to win them all in the same season.

“I’m still not number one in the world. I still have a lot to work on in my game,” he said.

“Obviously this week was good. I still thought I wasn’t playing amazing but I made do. I was able to make some putts here and there, hit some great chip shots, made up-and-down and made some crucial par saves out here and that’s what you need.”

McIlroy, a two time winner of this event, had led for most of the day but dropped three shots in his final four holes to sign for a 74.

A clearly frustrated McIlroy was spotted leaving the scorer’s hut with a torn shirt hanging off his shoulder. The World No.8 avoided the awaiting media and entered the Jumeirah Estates clubhouse via a side door.

McIlroy now takes a break before heading to the Bahamas for Tiger Wood’s Hero World Challenge on December 2.

Min Woo Lee had an outside chance at the European No.1 crown this week but in the end he had to settle for a share of 16th place, which saw him drop back one place in the Race To Dubai to 6th.

The Western Australian finished one shot ahead of fellow Aussies Lucas Herbert and Jason Scrivener with all three players racking up over €1million on the European Tour.

The European Tour begins its 2022 season this Thursday in South Africa at the Joburg Open.