Collin Morikawa has taken out the World Golf Championships-Workday Championship at The Concession Golf Club on Sunday in style.

Morikawa carded an 18-under-par total to finish three ahead of Brooks Koepka, Viktor Hovland and Billy Horschel for his fourth win in his last 34 starts on the PGA Tour including the 2020 PGA Championship.

The new World No.4 entered the final round with a two-shot advantage at 15-under.

He got off to a slow start, bogeying the second and briefly lost his lead to Horschel on the fifth green. Horschel birdied first to put the pressure on yet it was Morikawa’s putter that produced the results sinking birdie putts on the 7th, 9th and 12th holes.

When Morikawa nailed a four metre birdie on the par-3 11th hole he produced the gap he needed and closed in style again on the last with another four metre putt for good measure.

Earlier, Horschel had caught Morikawa after three holes and tried to stay with him. Koepka had the last good chance to catch him until, trailing by three with a 17-metre eagle chance on the 17th hole, he three-putted for par. 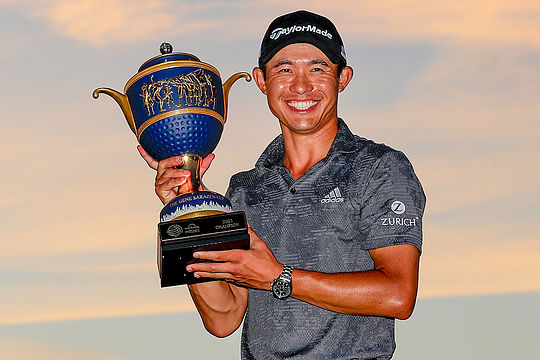 Scottie Scheffler was also in the mix with six birdies in 12 holes but drove into the water on the 16th and made double bogey to card a final round of 68 to finish fifth.

It was Morikawa’s first World Golf Championship title and one of his biggest pay days, pocketing an impressive US$1,820,000 with the victory.

“It shows that I can come out here and compete,” said Morikawa of his win over a field that included 47 of the world’s top-50 players.

“With how good the field was, how good my game felt, to close it out with such a stacked leaderboard coming after me, it really means a lot.”

As an amateur, Morikawa played collegiate golf at the University of California, Berkeley, from 2015 to 2019, winning five times including the 2019 Pac-12 Championship.

In May 2018, he spent three weeks as the top-ranked golfer in the World Amateur Golf Ranking. Morikawa graduated in 2019 with a degree in business administration.

Cameron Smith finished the best of the Australians in a share of 11th position with only a third round 77 robbing him of a much better result.

Jason Day finished at 7-under for a share of 18th position, with Min Woo Lee sharing 28th position at 5-under-par.

Marc Leishman and Jason Scrivener also pocketed some good cash finishing in a share of 39th and 41st respectively, whilst Wade Ormsby claimed a share of 52nd with Adam Scott two further back in a share of 54th.

Brad Kennedy and Lucas Herbert rounded out the Aussie contingent.