James Morrison’s patience in difficult final round conditions was handsomely rewarded as the Englishman claimed a comprehensive four-shot victory at the Open de España in Barcelona.

The 30-year-old Englishman, whose previous European Tour win came in Madeira five years ago, had shared the lead with compatriot David Howell at the start of the day after a third round four-under 68 in fast and windy conditions at Real Club de Golf El Prat. 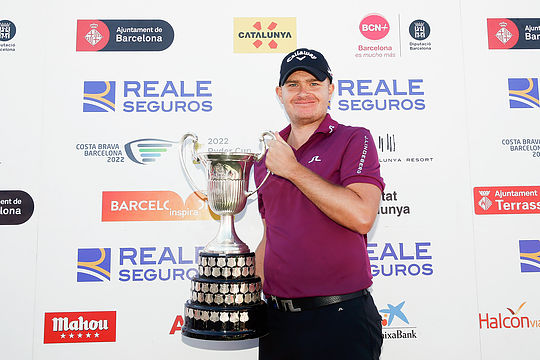 With the breeze up again in the final round, Morrison’s flawless 69 blew the field away as he led throughout to finish at 10-under.

“It feels amazing. 5 years since my first win, a lot of chances in between. Today I just drew on my experience and got over the line,” Morrison said.

“My game plan was to stick to my process. In know it’s really a cliché but it’s true. All my coaches have been really big on sticking to my process, just dealing with what comes in in front of me. Today, I stuck to my process all day long and executed it.”

Eventual runners-up Frenchman Edouard Espana, Howell, Italy’s Francesco Molinari and defending champion Miguel Angel Jiménez all made a run at the leader during the final round but Morrison was gritty in the conditions, strangling the life out of the field with eight straight pars on the back nine to head to the 18th with a three-shot lead.

A birdie on the par-five 18th crowned a marvellous display as the Brit took home the biggest win of his career and a cheque for €250,000.

“Winning the Open de España means a lot to me. Every year we come and play here and it’s always one of the best weeks of the year. It’s always on a great golf course, great crowds. I lost it once on a playoff and now I’ve won it, it will be dear to my heart now forever.”

Adelaide’s Wade Ormsby made a mockery of the trying conditions with a brilliant seven-under 65 to finish the best of the Australians in a logjam of players in 9th place.

One of the marquee events on the European Tour schedule – the BMW PGA Championship – tees off at London’s famed Wentworth Club on Thursday.

Fresh off a command performance in winning the Wells Fargo event in the U.S, world number one Rory McIlroy will cross the Atlantic in an attempt to defend his title against a class field that includes Justin Rose, Martin Kaymer, Graeme McDowell, Brooks Koepka, Lee Westwood, Luke Donald, Ernie Els, Brandon Grace and Victor Dubuisson.