In January, Micheluzzi recorded a dominant five-shot victory at Royal Melbourne Golf Club over a talented international field of amateurs. 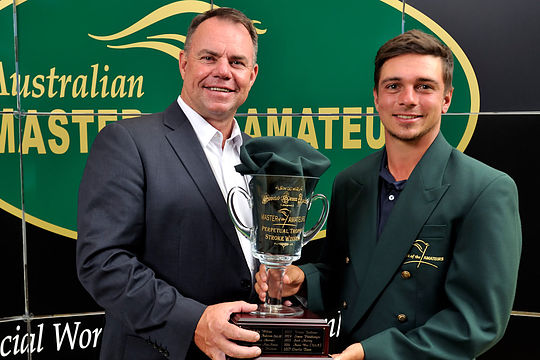 Gavin Kirkman, CEO of the PGA of Australia which owns the PGA Tour of Australasia, said he looks forward to the star amateur taking full advantage of the playing opportunity.

“I’m excited to see how David will play at the Fiji International presented by Fiji Airways; his amateur career speaks for itself and I trust he’ll enjoy the chance to play in a field full of established golf stars,” said Kirkman.

“We’re proud to give this opportunity to the winner of the Australian Master of the Amateurs and I wish David all the best in Fiji.”

Peter Mann, Tournament Director & Founder of the Australian Master of the Amateurs also was full of praise with the initiative shown by the PGA of Australia.

“We are extremely grateful of the PGA of Australia to recognise our champion and the status of our tournament,” said Mann.

“We are Australia’s Number 1 R&A ranked category event with “A” category status. We have been working with Gavin and his team towards this opportunity which will see David playing in a a tri-sanctioned European Tour and Asian Tour event against a fantastic field.”

“I got the news of my start in the middle of the Australian Interstate Series and we had lost a match to South Australia that day so I was a bit down but when I heard I’m playing the Fiji International I was over the moon,” said Micheluzzi.

“I’m very grateful to the PGA of Australia and Gavin Kirkman and the team and also to Peter Mann, the CEO of Master of the Amateurs. To get an opportunity to get my foot in the door in Europe is amazing, that’s where I want to be and where I want to be playing, it would mean the world to me to get to that stage.”

Over the tournament’s 20-something years, Peter and Angela Mann have continually used the phrase ‘Live the Dream’ when addressing the players, which has included the likes of Jason Day, Rickie Fowler, Victor Dubuisson, Patrick Rodgers, Tommy Fleetwood and Marc Leishman, to name a few.

2018 saw a changing of the guard with Jeff Kennett handing over the role of ‘Offical Honorary Chairman’ to Daniel Andrews, MP, Premier of Victoria and the Mann’s could not be happier.

“The tournament continues to go from strength to strength and this partnership with the PGA of Australia confirms the tournament’s standing as Australia’s best amateur event which enables our players to ‘Live the Dream’,” said Peter Mann.