Brad Moules has played a perfect round of golf at Kalgoorlie Golf Course and will hold the overnight lead at the TX Civil & Logistics WA PGA Championship.

Playing in the afternoon field, Moules executed his game plan to perfection to fire a bogey-free 6-under 66 to be the first round leader. 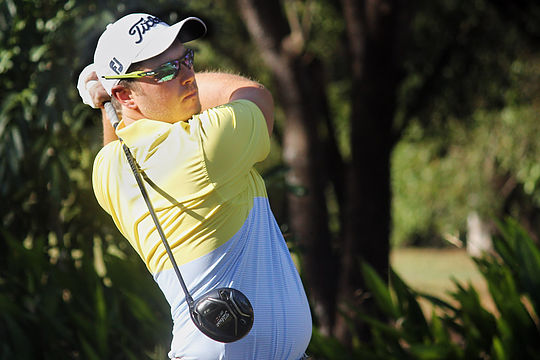 “I woke up this morning looking to get started the right way, get the ball in play and let it fall in the hole. I had six birdies and no bogeys which is what you want to do first up,” said Moules.

“You need to keep your head out there, it’s windy and the greens are quick. This is the sort of course where you can get very penalised if you’re in the dirt, it can really chew your ball up.

“I think I plotted my way around the course to plan and it worked so it was hard to pick standout shots because everything sorted of just went in.”

It’s a welcome round of golf for the South Australian who has struggled with swing changes since winning his first ISPS HANDA PGA Tour of Australasia title, the SP PNG Open, in 2016.

“It’s been a tough 12 months. I had the win two years ago and I was hoping to push on from that but a few swing changes have taken longer to come together,” added Moules.

“But today shows there is good coming so it is going to make dinner taste pretty nice and I can sleep on it tonight pretty happy.”

Sitting one shot behind Moules is West Australian Jarryd Felton who has an enviable record at Kalgoorlie Golf Course.

This is the fifth time Felton has played the layout since making his debut in the TX Civil & Logistics WA PGA Championship as an amateur in 2014.

All four times he has teed it up, Felton has finished inside the top-10 of his state PGA title.

With arguably the best track record at Kalgoorlie Golf Course of anyone in the field this week, Felton showed his prowess in the morning field firing 5-under 67.

“This is my fifth year; I first played as an amateur and played really well. I love the place, I love the course, it suits my eye really well so I’m really trying to keep my record of top-10s going,” said Felton.

“I am very happy with that round, in the windy conditions. It took a while to warm up; it was cold this morning, so I was just pacing myself on the front-9 to get a feel for it.

“Then you just have to hold on, there are some tough holes on the back-9. I played well there and made a few birdies which was great.”

Meanwhile, in his debut at the TX Civil & Logistics WA PGA Championship, Jake Higginbottom fired 3-under 69 to be tied 7th alongside Fijian Sam Lee and New South Welshman Darren Beck.

The second round of the TX Civil & Logistics WA PGA Championship tees off at 6.50am with Brad Moules on course at 7.30am.