Leader Matt Jones has been very low key when pressed on his thoughts on winning his maiden Australian Open title at the course that he grew up on. 35-year old Jones has spent many a teenage year running around The Australian layout as a spectator at this championship, following Tiger Woods in 1996 and ‘a lot’ of Greg Norman over the years. 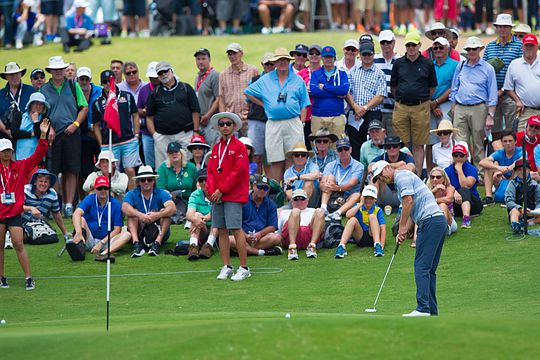 Matt Jones putts during round two of the Australian Open (Credit: Anthony Powter)

Though he won’t say it and is espousing a cautious ‘there’s a lot of golf to be played’ mantra, there’s no doubting how much Jones would like to win this title in front of home fans who he concedes, know less of him than they do an Adam Scott or Jason Day,

There’s also the added bonus of entry to The Open Championship at Royal Troon next year for the top three not already exempt players. At this point, Jones is not exempt into any of the four majors next year which form part of his reasons for being here this week.

For Todd Sinnott and Lincoln Tighe, today will be another day of new experiences in the early stages of their professional carers. Sinnott contended for the 2014 Open as an amateur while Tighe entered the second round as the championship leader for the first time. The 26-year old performed wonderfully well under the gaze of plenty of new fans before spluttering late in the round.

He might have readily accepted being tied for 3rd at the halfway mark before the championship commenced and will take that mindset into today’s third round with a further chance, like Sinnott, to catapult his career to an entirely different level over the weekend.

For players like Geoff Ogilvy and Nicolas Colsaerts, Saturday provides an opportunity to continue their resurgence to the form both have displayed in the past. Ogilvy has had the more storied career of the two but has not won in Australia since the 2010 Australian Open at The Lakes.

His ball striking has been impeccable through the first two rounds and marrying that with some improved fortune with the slightly longer putter he’s been using of late might see him claim the Stonehaven Cup on Sunday night.

Colsaerts’ career has lulled somewhat since the highs of winning twice on the European Tour in 2011/12 and starring on debut for Europe in the classic ‘Miracle of Medinah’ Ryder Cup matches that year. Claiming the 100th Australian Open title would be a major fillip for the career fortunes of the highly talented Belgian, especially ahead of a Ryder Cup year in 2016.

For defending champion and world number one Jordan Spieth, the career significance of a repeat victory on Sunday may be less obvious after the spectacular year he’s carved out in 2015. However, the 22-year old has made all the right noises about his love for Sydney and Australia and is sincerely genuine in his reverence for the Australian Open championship and it’s history. There’s no doubting he has a passion to win the title again.

If an Australian victor is not possible, local fans might be pulling for a Spieth victory if only to increase the chances of the Texan returning for a third-straight appearance next year.

However, much will hinge on today’s outcomes on a day where weather may play a significant part in proceedings with dark clouds circling The Australian Golf Club as the early groups make their way on course.