Mullinax fights his way back to Korn Ferry podium

American Trey Mullinax has claimed victory at the Orange County National Championship on the Korn Ferry Tour after the former University of Alabama player drained birdies on the 16th and 18th holes for a one stroke win over Brandon Wu and Stephan Jaeger on the Panther Lake course at Orange County National.

Wu, who has earned five top-10s in his nine starts this season, made a late charge with seven birdies offset by a bogey in the final round. Jaeger came up one stroke short after birdieing three of his final four holes. Jaeger was looking to become the sixth player to earn at least six wins on the Korn Ferry Tour. 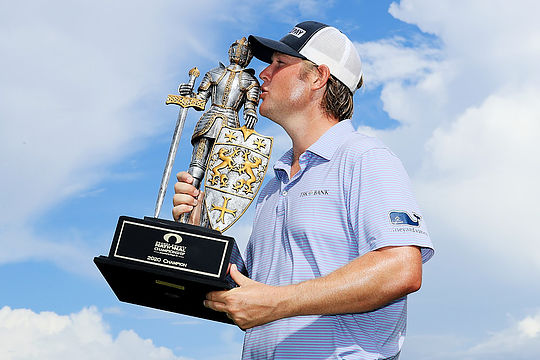 The win was timely for Mullinax following a few lean years on tour and challenges with injury yet this season has seen the 28-year-old collect three top-10′s in his last five starts.

“It feels good to be back winning,” said Mullinax. “It’s been a while for me, I think since 2016. It was a grind out there today. I did not have my best stuff. Today’s my mom’s birthday so I talked to her the other night and I told her I was going to go out and try to win it for her. So Mom, happy birthday.”

What’s In The Bag: Trey Mullinax

Mullinax turned professional in 2014 and has played on the Web.com/Korn Ferry Tour since 2015. He won the Web.com Tour event at the 2016 Rex Hospital Open which is his only other win on the secondary tour.

In April 2018, Mullinax fired a course record 62 during the third round of the PGA Tour’s Valero Texas Open at TPC San Antonio, to position himself one shot back going into the final round.

He finished as joint runner-up, after a final round 69, to record his best PGA Tour finish to date. He also finished tied 9th at the 2017 US Open.

Victorian Brett Coletta had another stellar tournament moving 36 places with his final round 64 to finish in a share of 15th position. The result follows Coletta’s tied for 3rd last week at the Savannah Golf Championship and sees the Victorian moving to 83rd on the Korn Ferry rankings.

Earlier in the season at the King & Bear Classic at World Golf Village, Colletta carded a first-round 63 and co-led after the first and second rounds before going on to a T14 finish.

Harrison Endycott was the next best Aussie securing a top-30 finish with Brett Drewitt finishing in a share of 46th position and the last of the Aussies to make the weekend.

The tournament was the final event of 2020 for the Korn Ferry Tour, though the schedule is being combined with the 2021 slate for one extended season concluding in the fall of 2021.