American Trey Mullinax earned not only his first PGA Tour win in taking out the 2022 Barbasol Championship, but the final spot in the field for this week’s Open Championship at St. Andrews.

The 30-year-old shot a 6-under 66 on Sunday in a rain delayed tournament to follow rounds of 65-65-67 and hold off a charging Kevin Streelman, who missed his birdie putt on the 18th that would’ve forced a playoff.

“I stayed focused for 72 holes,” said Mullinax. “I missed a couple of opportunities with the putter and just told myself to keep putting, been putting great. Been hitting my irons beautifully all week, probably the strongest part of my game. I knew I was going to have that shot a couple of times, and I hit a great shot at the right time.”

Mullinax and Streelman entered the final round tied for third at 19-under-par. They were three strokes behind Matti Schmid, who faded to a 77 on Sunday, and one behind Hurly Long, who shot 71 in the final round. 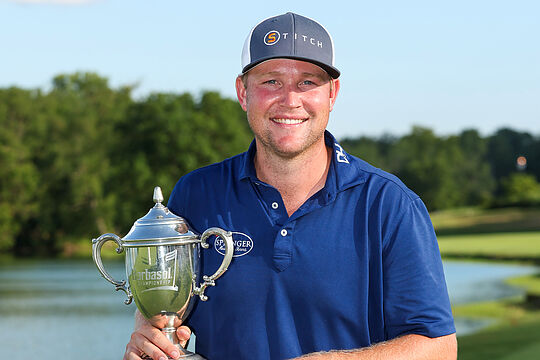 Mullinax was playing in his 106th PGA Tour event at the Barbasol Championship and in addition to the Open Championship spot, Sunday’s victory also secured him exempt status on the PGA Tour through to the end of the 2023-24 season and a cheque for US$666,000. He moves from 370th to 190th in the world rankings.

As an amateur, Mullinax played college golf at the University of Alabama where he won two tournaments, was an All-American, and helped the team to the 2013 and 2014 NCAA Championships. He has two wins on the Korn Ferry Tour, 2016 Rex Hospital Open and the 2020 Orange County National Championship.

Cameron Percy and Aaron Baddeley, a winner of the title in 2016, finished the best of the Australians in a share of 41st position at 12-under, with Greg Chalmers in a share of 47th position. Brett Drewitt missed the weekend.