Colombia’s Sebastián Muñoz made a superb 5-metre birdie putt on the final hole to force a playoff before defeating South Korea’s Sungjae Im with a par on the first extra hole to win the Sanderson Farms Championship.

The 26-year-old was among four players in contention over the back nine but it looked as though the 21-year-old Im was destined for victory when he reeled off a string of birdies beginning at the par-5 14th.

He eventually closed with a 66, and that looked like it might be enough for the 2018-19 PGA Tour Rookie of the Year to secure his first title but Muñoz had other ideas as he found the bottom of the hole at the 18th.

The victory earns Muñoz a spot at the 2020 US Masters for the first time and ended a streak of 38 consecutive PGA Tour events that were decided in regulation play dating back to Charles Howell III winning in a playoff at the RSM Classic back in November last year.

“[Joaquin Niemann] winning last week was kind of like the last piece of the puzzle that I needed to know that we’re good enough, we’re able to compete. That we’re here, we’re PGA TOUR members, and we play to win. Seeing him raise the trophy last week was just — I don’t know — inspirational for a little bit” said Muñoz, referring to Latino golfers on the PGA Tour.

“I’m so thrilled to be here and to be the champion. I always will have a special connection to Jackson, Mississippi because this was the first event I ever played as a PGA TOUR member back in 2016.” 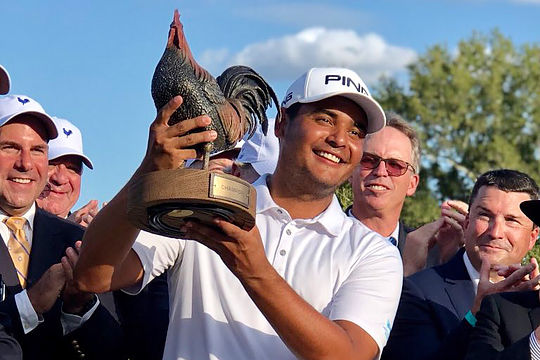 In what was a quick turnaround in fortunes, Muñoz was battling to save his PGA Tour card just last month at the Wyndham Championship, however he is now exempt through to the 2022 season.

Cameron Percy finished as the leading Australian despite a disappointing final round 71, which left him just four shots shy of a spot in the playoff.

Cameron Davis moved up ten places today following a 3-under 69 to finish in a share of 28th place.