Anthony Murdaca’s game and mental fortitude was put to the test today and he proved that he had the goods by winning the Asia-Pacific Amateur by seven shots with a 13-under total over Japan’s Horikawa Mikumu at The Royal Melbourne Golf Club.

Starting the final round at 12-under after earlier rounds of 69-68-67, Murdaca was eight in front from his nearest rivals, Pan Cheng-tsung, Jin Cheng and fellow Aussie Todd Sinnott heading into the final round. 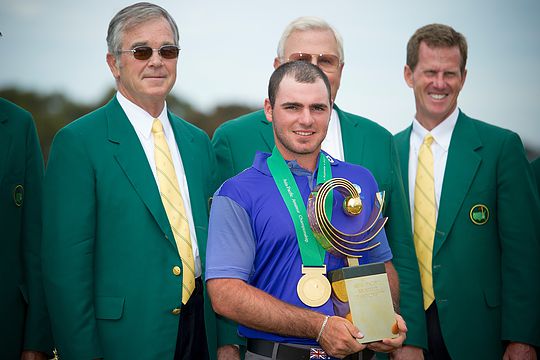 A solid and tradesmen like closing round of 1-under-par 71 ensured Murdaca’s place in next year’s Masters, an exemption into the British Amateur Championship and a place in The Open Qualifying series.

“It’s special. It’s definitely a dream that’s come true for me now,” said Murdaca about the spoils of victory.

“I always wanted to play in the Masters and it’s so exciting now knowing that next year I’ve got a spot there. And also get to go qualify for the British Open at St. Andrews, so it’s very exciting.”

During this championship Murdaca’s course management was second to done. The 19 year-old showing respect towards Royal Melbourne’s composite layout which was presented magnificently.

He attacked the layout in the right places and showed caution when needed. This was a very sweet victory for the South Australian.

“You have to be careful out there in places,” said Murdaca, a twice Australian Junior champion with victories in 2010 and 2013.

Murdaca was the only player in the field to shoot four rounds under par, his ball striking impeccable and he rolled the rock with a degree of confidence most others in the field lacked, not recording a 3-putt in the final round at Royal Melbourne, which is something special in itself.

“I was feeling comfortable in my short game and iron play and I’m hitting fades again which is pretty good. I was hitting fades back in Aussie Junior when I won and fades seem to do the trick.”

Overall this tournament was a complete Aussie success story. Ten Australians started and all made the cut with five securing a top-10 finish.

Todd Sinnott finished in 3rd position at 5-under after holding the first round lead where he opened with a 67 but closed with rounds of 71-74-71.

Ryan Ruffels was 4th at 3-under with rounds of 71-71-75 with his final round 68 the day’s low round along with Lucas Herbert, who finished in a tie for 8th with Geoff Drakeford.

Murdaca came to Royal Melbourne having missed the cut at Keperra Bowl after a bout of food poisoning. Despite the less than perfect preparation, Murdaca was confident he could win this event.

“It didn’t really lower my expectations I guess,” said Murdaca. “ I always wanted to come here to win.”

This was a deserved win by Murdaca, he played like a champion never letting the rest of the field in. Now he’s Augusta bound and what a place to experience his first major.